The Ministry of Public Security is still trying to recover overpayments to contractors even as it puts measures in place to ensure that contractors are no longer paid in full for work that is incomplete. 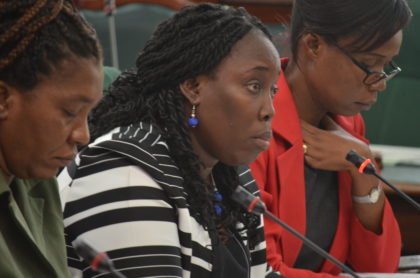 Permanent Secretary (PS) of the Ministry of Public Security Daneilla Mc Calmon appeared before the Public Accounts Committee (PAC) today in the Parliament Chambers to explain how outstanding monies will be recovered. The 2015 Auditor General’s Report into the Ministry found several instances of overpayment to contractors.

In one instance, in 2010, the Ministry would have overpaid$3.504M to a contractor for remedial works to the Albion Police Station.  That contractor had subsequently agreed, in writing, to repay the Ministry but this was never done.

Member of Parliament Charandass Persaud suggested that the Ministry engage in “a set off” with contractors who owe the Ministry. These contractors will not be taken out of the bidding system but will have monies deducted incrementally from projects they work on to offset the outstanding amounts owed, Persaud explained. This suggestion was welcomed by PS Mc Calmon. The Ministry has not fully recovered all outstanding monies and in one instance, the court ruled that the money cannot be recovered because of a release letter signed by the Ministry.

Meanwhile, the Ministry of Public Security will be putting measures in place to ensure that no contractor is paid in full after one supplier 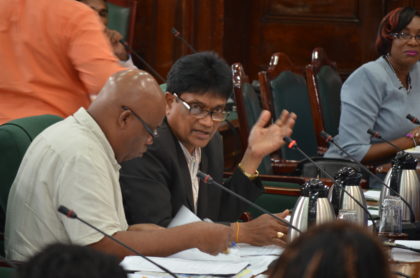 failed to complete a delivery order which included an industrial washing machine and dryer, since 2014.

The Permanent Secretary, following questioning, revealed that the industrial dryer and washer were sole sourced for the Camp Street prison.  The items were paid in full and there was no bond security. Mc Calmon assured, the PAC, that the contract went to the National Tender and Procurement Board and offered to provide the documentation to the PAC to validate this. The PS further explained that the overseas based supplier, is Tactical and Commercial Incorporated. She added that the Ministry has since had difficulty making contact with the supplier, “He’s not taking our calls, he’s not responding to our emails.”

It was suggested by the Chairman of the PAC, Irfaan Ali that the PS contact the United States Embassy and “ask for information regarding this company”. The PS noted that since she has assumed the position, she is putting measures in place to prevent instances like this from reoccurring. “Instructions at the Ministry are that no company is to be fully paid until items are delivered. Secondly, I always ensure that we receive a bond for any amount that we paid out for,” McCalmon said.