The Ministry of Education will be looking at transitioning the School Health, Nutrition and Human Immunodeficiency Virus and the Acquired Immune Deficiency Syndrome (HIV/AIDS) Unit into an official implementing unit within the ministry.

It will be equipped with the tools to continue to expand its scope of work in collaboration with partners like the United Nations Children’s Fund (UNICEF). 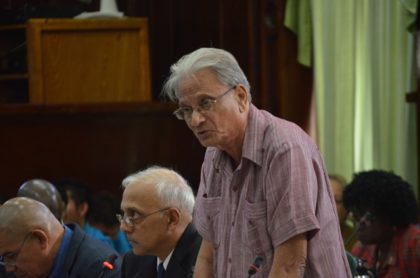 This, according to Minister of Education, Dr. Rupert Roopnaraine is among several measures that are expected to be implemented in 2017 towards the continued improvement in student welfare. The Minister was at the time speaking in the National Assembly about the education measures provided for in Budget 2017.

In 2017, as well, Government will also be looking at ways in which to intensify and diversify the work undertaken by the Monitoring, Evaluating, Reporting and Development Unit.  Minister Roopnaraine said that this means not simply reviewing its internal operations and engagement with schools, but also exploring ways to solicit information more directly from those, the education system is meant to serve, the communities in which these schools exist.

“If any lesson the past year has taught us, it is that we have to find more efficient ways, beyond even the PTA system, of listening to people on how they feel the education system is working and how it is not.  It is only then we can really develop and implement holistic solutions to our many and increasingly complex challenges,” the Minister said.

Among other social support measures to be rolled out in the upcoming year, will be a significant increase in the number of counsellors in the school system, Minister Roopnaraine said.

He also pointed to the fact that government will be expending $1.9 Billion in the school feeding programme and providing $578 Million towards the provision of textbooks. Recognising that infrastructure is an invaluable component of improving student welfare and education service delivery,  the Minister said that in 2017, government intends to expend over $3.5 Billion on the construction, rehabilitation and maintenance of schools, teachers’ quarters and other buildings.

Additionally, Government will be exploring a programme of linking specific recreational grounds to schools, either individually or in clusters, and will also be upgrading facilities of existing grounds in specific catchment areas.  At the University of Guyana, Government is currently finalising the construction of a new 300-seat lecture theatre, as well as a new student services building.

In 2017, Minister Roopnaraine said that Government will be commencing the construction of a new school of medicine on campus, as well as, under the Yesu Persaud endowment, a facility for clinical services attached to the Georgetown Public Hospital Corporation.