Residents of Sparendaam and the surrounding areas will before year-end, benefit from 24-hour water supply service.

The well will produce 150-200 cubic clear water per hour and is fully capable of running 24-hours a day. It will have a depth of 750ft and diameter of 700ft with backfilling to prevent collapse. 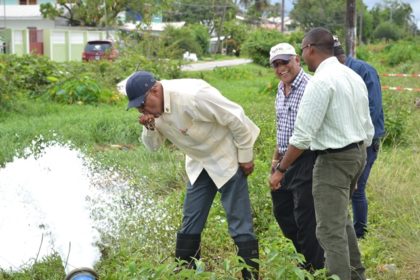 Guyana Water Incorporated (GWI) Managing Director Dr. Richard Van-West Charles said that the $40M well is slated to boost the water service within the community. This was highlighted during a walk-about at the well site conducted by the Managing Director and his team, on Wednesday.

“Clearly the existing well has been dropping in its production. So, this well, actually the production will be double that of the existing well, the residents should not have any problems whatsoever and I think this will be a good Christmas gift for the people of Sparendaam and Plaisance,” Dr. Van-West Charles explained.

The area was highlighted as one of those, where residents coped with poor water service hence the construction of the well to rectify the problem. According to Dr. Van-West Charles, the Sparendaam well will be interconnected to the well located at Industry.

Executive Director of Operations Dwayne Shako explained that Sparendaam is not the only area set to benefit from improved water supply before year-end. “This area is basically served by two wells, which is the Betterhope water treatment plan and Sparendaam well. So, what we (GWI) are doing is expanding the Betterhope water treatment plant where we have activated another well at Betterhope and presently building a filtration system at Betterhope,” he explained.

The interventions at Betterhope will provide Plaisance, Ogle, Diamond and sections of Industry with improved service by mid-December.

Dr. Van-West Charles said in the continuing effort to provide quality water service, the Diamond area is likely to receive another well, since there has been an uptake in the number of its inhabitants. He highlighted that GWI will also purchase a rig to drill as a cost-reducing measure.

The Sparedaam well is one of three being executed for the water company by the Dutch firm De Ruiter Grondwatertechniek. The first was at Diamond, whilst Sophia is next in line to benefit from quality water service.

Residents within Sparendaam and surrounding areas were also encouraged to submit their applications for connections to their homes in order to benefit from the well. 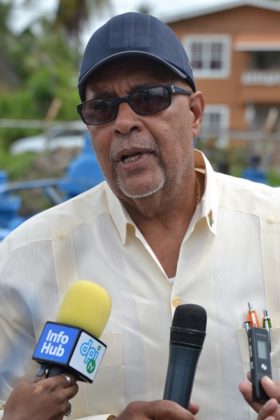 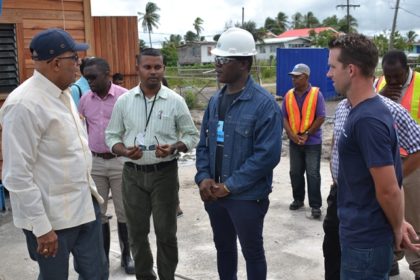