The 2017 National Budget has been described by Prime Minister Moses Nagamootoo as one that has deliberate focus on ‘doing good’ for the vast, greater majority of Guyana.

The Prime Minister added that “it is a qualitative new leap into distributing the resources of the state and focusing on the people, who matter- the rural poor, the hinterland folks, Amerindians, the elderly, students and children, women. 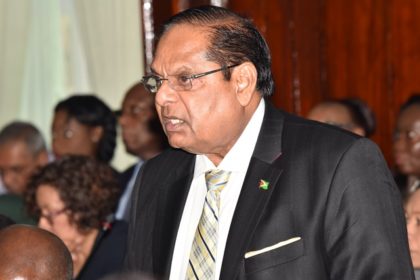 The Prime Minister said he believes that it is a budget “that is trying to take the country out of its past of inequality and deficiencies into laying the foundations for a solid economy, and therefore I believe that the budget would touch all, in a positive way.”

The Prime Minister and Finance Minister Winston Jordan shared their thoughts on the budget, at a joint press conference this evening at Parliament building.

He emphasised that under this new regime, the take home salary would be better.

The Finance Minister spoke to the reduction of the Value Added Tax (VAT) from 16% to 14%, and the new measure of 14% VAT on electricity bills over $10,000 and a similar amount on water rates for consumption in excess of $1,500 per month.

The Minister explained that if a person was working for $100,000 per month, as most public servants do or less, and paid an estimated rent of $40,000 then their electricity cost should not exceed an average of $10,000 per month.

The Finance Minister said that studies were done which show that $10,000 is a very high threshold for electricity consumption. He opined that this new tax will act as a conservation measure, “as most people will decide I’ve got to look at my electricity bill here, similarly with water.”

He added that it was public knowledge that once the regular VAT was reduced, the shortfall would have to be made up elsewhere. “I specifically remembered that I mentioned in many interviews that electricity and water would be fair game, under VAT where we have to reduce that measure but we are certain that not everybody is going to be paying this VAT on water bills…This is also acting as a conservation measure as we work towards a green economy.”

Asked about the decision not to further reduce the toll on the Berbice River Bridge, Minister Jordan stated that despite the initial reduction, a further lowering of the tolls was not possible at this time. He pointed out that despite the local economy’s growth; it was doing so “very slowly”. He said that even as the economy was projected to grow, there were a lot of dependents such as sugar and rice.

The promise made by the Coalition Government whilst in Opposition was recalled by the Minister, but it was not anticipated that sectors such as sugar were in such poor financial states. “In less than 18 months, we would have transferred $32B to GuySuCo. Just imagine if we didn’t have to transfer money to GuySuCo, $32B would been available and part of it could have been used to reduce the tolls even further than we have done so far, but even the little that we have done so far cost us almost $200M per year.”

The Finance Minister added that the income tax measures will cost the treasury almost $4B.

He also explained that the list of VAT exempt items has been “significantly expanded” but he doubted given previous experience with the business sector that any price reduction would be realised. “This has been a bone of contention because every time we reduce VAT, the prices don’t go down.”

Lending his voice to that of Minister Jordan’s, Prime Minister Nagamootoo explained that of the 138,000 Guyana Power and Light (GPL) customers, about 105,000 residents and 4,800 businesses pay less than $10,000 in electricity rate per month, hence some 80% of customers would not be affected by the new VAT measures.

In closing, the Prime Minister placed on record his appreciation for the hard work put in by the Finance Minister and his team for the ‘purposeful’ budget. “This must be one of the strong considerations that you are not penalising the consumers, but you’re trying to introduce measures would tell you that electricity is a scarce resource. It is a precious national resource and while GPL may want to make money, it also has a national responsibility to ensure that people use electricity responsibly.”