$3.4BILLION approved for Region One

The sum of $3.4Billion was approved for the Region One, Barima-Waini Regional Administration during the consideration of the estimates and expenditure this afternoon in the National Assembly.

Under the Education capital programme for 2019, the sum of $151.200 Million was approved for rehabilitative work to the Port Kaituma Primary and Secondary schools and extension of White-Water Nursery School. The sum also caters for the construction of sanitary blocks at Waramuri, Port Kaituma and St. John’s Primary schools and the construction and enclosure of living quarters at Unity Square and Manawarin. 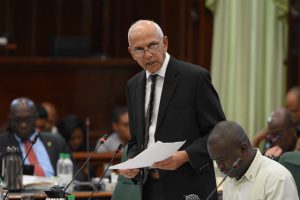 Some $21.9Million will also be spent on school furniture and equipment Including equipment for Smart classrooms, desks, benches, cupboards, tables, chairs, racks, fire extinguishers, musical and sports equipment at several schools in the region.

$15.7Million was also allocated for transportation. This amount was questioned by opposition Members of Parliament who requested that Communities Minister Ronald Bulkan provide the details for the sum allocated. The Minister explained the money caters for boats and outboard engines at Moruca, Barama, Pawaikuru, and St Nicholas, Waramuri and Santa Cruz Primary and Santa Rosa Secondary Schools among others.

In the area of Health, $101.1 Million was allocated for the completion of x-ray room at Pakera District Hospital and staff quarters at Mabaruma; construction of maternity waiting home at Santa Rosa, health training complex at Mabaruma; health post at Parakese and incinerator at Kwebana; enclosure of living quarters and upgrading of central duct system at Mabaruma Regional Hospital and the provision for hot water baths.

An ambulance will also be purchased for the Kumaka District Hospital at a cost of $14Million.

Minister Bulkan explained that the electricity distribution network at Waramuri will cater for 350 residents. It will also provide electricity to the schools, health facility and police station that are currently without power.

Meanwhile, under Agriculture, the sum of $20 Million was earmarked for the establishment of a food processing facility at Mabaruma.