—9 schools commissioned in Hinterland since 2019

Walking lengthy hours to school is now a thing of the past for students of two South Rupununi villages.

These pupils now have access to two fully equipped Primary Schools in Bashaizon and Achiwib that were commissioned on Thursday by Minister of Indigenous Affairs, Hon. Sydney Allicock and Minister of Social Cohesion, Dr the Hon. George Norton. 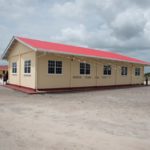 The Bashaizon Primary School in Region 9. 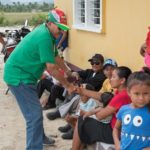 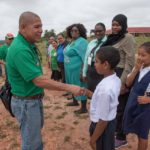 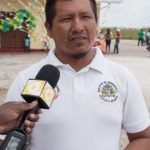 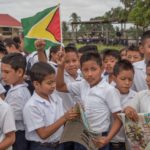 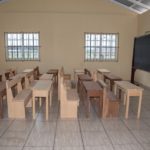 A classroom in the Bashaizon Primary School.

Noting that the 47 students of Baishazon previously had to trek 9km to school every morning and afternoon, Toshao, Sidwell Johnson appreciatively remarked, “Now, that the school is here right, newly built, I’m very glad the children now will have better access to education.”

Minister Allicock while addressing the residents of Bashaizon said “we need young people to help us build…every single Guyanese will have a chance to help Guyanese be united.”

Adding that students have better opportunities today than ever before, Minister Allicock reminded the residents that Guyana needs a range of professional specialities to move forward. The Minister also called for residents to combine their local knowledge of flora and fauna with their formal education to produce even better graduates from the Region.

“We are working to make certain no one drops out and that everyone goes to school and completes their education,” Minister Norton emphasised as he highlighted the government’s push to ensure access to education reaches the furthest corners of Guyana.

Regional Education Officer (REdO), Region 9, Keane Adams noted that in today’s global world, education is both a necessity and an investment which must be embraced with the seriousness it deserves. She further added that in this regard, the government has taken a firm stand in ensuring that the welfare of communities is met, particularly through education.

Assistant Regional Executive Officer, Althea Fitzpatrick revealed that another Secondary School will be built in Lethem this year to accommodate the growing number of students. Additionally, all dormitories will be extended allowing more students from outlying communities to get access to secondary education.

Since 2019, eight new schools have been built and commissioned in Hinterland communities creating more learning spaces with another four expected

Sitting roughly eighteen hours away from central Georgetown, Bashaizon is a border community populated by over 100 Wapishan Indigenous peoples.