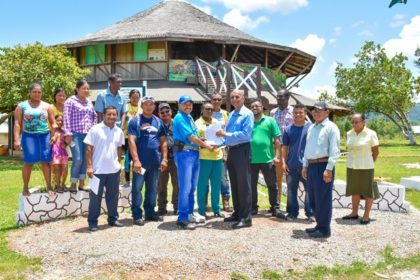 Minister of Indigenous Peoples’ Affairs Sydney Allicock (center) handing over the contract to Accountant of B K International Inc. Esau Samad in the presence of government officials, residents of Annai and educators of the Bina Hill Institute.

The dormitory is expected to accommodate approximately 40 female students from the surrounding communities. Minister of Indigenous Peoples Affairs, Sydney Allicock told the gathering that the signing of the contract signals the emphasis that government is placing on education.

According to the Minister, the construction of the dorm is just the beginning of providing better facilities for young people. This he said will allow them to make meaningful contributions to village, regional and national development.

Esau Samad, accountant at BK International Incorporated, expressed the company’s honour at being awarded the contract and assured that they have the expertise to provide quality work. Additionally, Samad indicated that persons from the region are the ones who will benefit from job opportunities.

Gloria Duarte, one of the tutors attached to the Bina Hill Institute said that she is thankful that institution is finally being 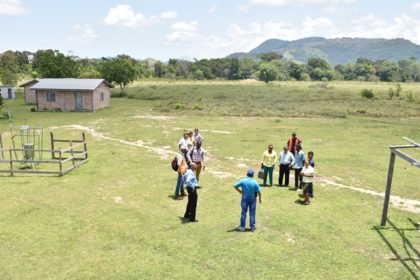 The site where the dorm is expected to be constructed.

considered. Duarte said, “We are so happy that the government considered this project and award the project to Bina Hill Institute so that the students here will be more comfortable and it will be easier for the manager in charge to manage the dorms (dormitory).”

The same sentiments were expressed by Eugene Xavier, Executive Director of the North Rupununi District Development Board (NRDDB). Xavier said that the construction of the dormitory is something the students have been anxiously awaiting.

With the signing of the contract he noted “I am very happy, I am very pleased with what has transpired… We look forward to quality work so that our people can benefit.”

Construction of the dormitory is expected to commence within the next two weeks. The bulk of the materials that will be used for construction will be sourced from the region.

The contract for the construction of the male dormitory, to house approximately 40 students as well, has also been awarded to B K International Incorporated and is expected to be signed in the near future.