$4.5B to develop Essequibo region

Four point five billion dollars ($4.5B) has been allocated for Region Two’s development and transformation with one hundred and seventy-five million dollars ($175M) to be spent on projects in the education sector.

In supporting Budget 2019 during the National Budget Debate today, Member of Parliament (MP), Haimraj Rajkumar said that among projects to be executed are the extension of the Adventure Nursery and Wakapou Secondary Schools and the construction of a sanitary block at Capoey Nursery School. 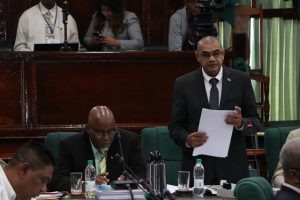 Rajkumar informed MPs that some $16Million will also be spent in acquiring school furniture and equipment, including apparatus for smart classrooms, music and sports and computers for Information Technology (IT) labs.

A total of $88Million will be spent on the completion of the theatre at Suddie Hospital and the rehabilitation of electrical systems at the Suddie and Oscar Joseph Hospitals. The health centres at Kabakaburi, Wakapou, Karawab and Siriki in the Pomeroon River will benefit from the installation of solar-powered systems.

In 2019, the roads at Charity Housing Scheme, Dartmouth, Good Hope, Lima and L’Union will be upgraded to the tune of $54.8Million while bridges at L’Union, Lima and Riverstown will be constructed.

Further, the government intends to transform the Supenaam waterfront into a modern business hub, with improved facilities for the mooring of speedboats and a waiting room for passengers. Rajkumar announced that works have commenced and the project is expected to be completed in the first quarter of 2019.

Among the transformative projects executed in Region Two in 2018, was the 300metre sea defence project at Johanna Cecilia, Essequibo Coast and the asphalt road at Onderneeming costing $40.1Million. Three new generation sets were also installed at the Anna Regina Power Station.

Rajkumar said that Budget 2019 is “a comprehensive document of the Coalition Government’s plan for the continuous development of this beautiful country of ours. It demonstrates government’s commitment to providing the Good Life to all Guyanese.”