40 youths across Guyana to participate in Youth Parliament

Today the Parliament Office officially launched its Youth Parliament which is expected to see the participation of 40 students from secondary schools across nine administrative regions.

The Youth Parliament will be held from August 6-12 under the theme “Our Generation, Our Voice to Inspire, Encourage, Impact”. The week of activities will commence on Monday with a training seminar for the participants. 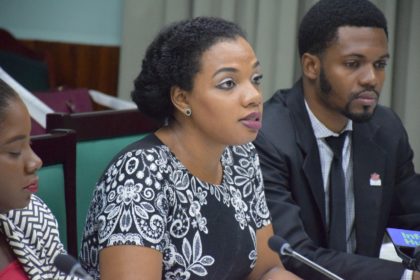 Jocette Bacchus, the Clerk of Committees, said the objective of the Youth Parliament is to ensure young people are involved in parliamentary democracy, understand the principles that underpin democracy while developing elocution skills.

The students will be debating motions on topical matters such as the Guyana-Venezuela border controversy, suicide prevention, capping of CSEC subjects and oil the oil and gas industry during the sitting.

Youth Parliament began in 2015 when Minister Raphael Trotman served as Speaker. While the event was usually hosted in observation of Commonwealth Day, this August sitting is expected to become an annual feature.