All aboard for fun and learning

The long-awaited opening of the learning complex in took place on June 17. In addition to 10 caregivers, an administrator, a cook, handyman and three security officers are also employed.

In July of last year, the building was formally commissioned by Minister of Finance Winston Jordon who posited that early childhood education is vital for the development of the nation’s children. Since then the Regional Administration was busy putting all the necessary logistical arrangements in place for the smooth functioning of the institution.

Speaking exclusively to the Department of Public Information (DPI), at a simple orientation ceremony held for the selected toddlers and their parents, Regional Executive Officer of Region Three Jennifer Ferreira-Dougall noted that the administration received over 100 applications but could have only facilitated 50 because that is the capacity of the institution.

“Because of the number of applications that were received, an interview panel was established to screen the applicants. We have given priority to working single mothers and families with small pay cheques in order to ensure that persons in need benefit from this facility that is offering its services free of cost,” REO Ferreira-Dougall explained. 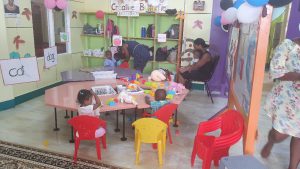 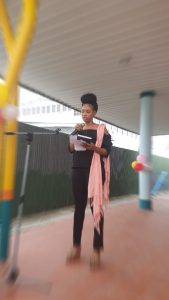 The REO further indicated that the Child Care and Protection Agency has a direct oversight of the complex since they are responsible for the overall responsibilities of our nation’s children.

Child Care and Protection Officer Zalika Williams explained that the region has satisfied all the requirements that were necessary in order to open the institution to the public. She also noted that her department had already visited the institution twice since the opening and plans to make frequent visits in the future.

“We already visited the school two times and will continue to do so frequently. Parents must feel satisfied with the kind of services that are being offered by Government and we have a role to ensure that the adults who are caregivers do the right things. We want persons to recommend the facility and it must become a model institution that changes the perception that all is not well with free services,” Williams said.

The building was constructed by the Government through the Ministry of Finance – Basic Needs Trust Fund. The facility includes four care areas/classrooms, a sleeping area, sick-bay, a staff room, an administrative area, storage spaces, a kitchenette, a laundry room, sanitary facilities, and an outdoor play area for the children.