(Georgetown, February 15, 2017) – The very first Mashramani celebration was held in 1970 when Guyana achieved Republican Status. The event was coordinated by the Jaycees of Linden.

The Guyana National Museum today opened its annual Mashramani Exhibition at the Egbert Benjamin Exhibition Centre and Conference Centre as part of the National events listed to commemorate Guyana’s 47 Republic Anniverssary. The exhibition has on display a range of information and exhibits on Mashramani; these include costumes, float, masquerade, pictures and memorabilia. Also mounted are paintings and sculptures from the National Gallery of Art. 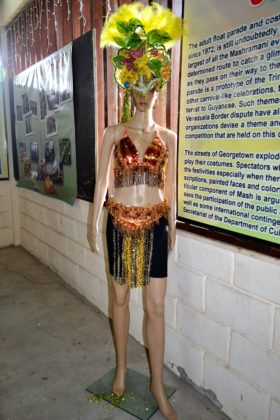 In her remarks, the Director of Culture (ag), Ms Tomika Boatswain noted that the Ministry is proud to partner with region 10 for the exhibition.

Ms Boatswain explained that while there are many festivities, many may not remember the symbolism of Mashramani which is the attainment of Guyana’s Republic Status.

The DOC (ag) noted that the acheivement of such a status meant that Guyana was able to create its own national symbols.

For a number of years, the residents of Region 10 have been participating in the costume and float parade in Georgetown, followed by another parade held in Linden. The Regional Chairman, Mr Rennis Morian announced that the Region will have a 40 man contingent representing Region 10 on the 23 February.

While recognizing that the event is a historic one, the RC emphasized that he is pleased that the happenings in Georgetown are now decentralized. 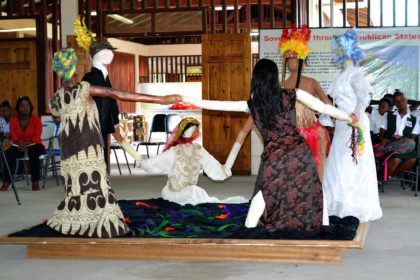 road map of Mashramani.” Further, it is important that notes be taken as the available information can help with future assignments.

The RC noted that Guyana’s youth are the ones who will come up with the ideas to take Mash into the future. “The youth have the brain power to create change in all national programmes,” the RC said.

Meanwhile, the Mayor of Region 10, Mr Carwyn Holland noted that those who started Mash celebrations in Region 10 must be commended for their efforts.

“Mash is not a time to wine-up…the true meaning of Mashramani must be understood…our culture has been watered down too much. Nevertheless, the RDC is doing a lot to revive our culture,” Mayor Holland stated. He added everyone should be proud of our heritage.

The very first Mashramani celebration was held in 1970 when Guyana achieved Republican status. The event was coordinated by the Jaycees of Linden. 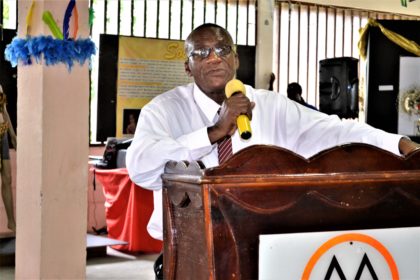