Another $9.3M in grants disbursed to Reg 9 communities

Another $9.3M in grants were delivered to six North and Central Rupununi communities in Region 9 (Upper Takutu- Upper Essequibo) for various economic projects.

The cheques were presented to the village leaders by Prime Minister, Hon. Moses Nagamootoo during the commissioning of the Hinterland Green Enterprise Centre in Annai, on Friday.

With a grant of $5Million, Nappi in Central Rupunini will construct a benab and kitchen at the Nappi water Reservoir Eco Lodge, to boost their tourism venture. 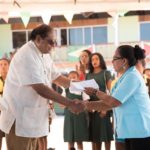 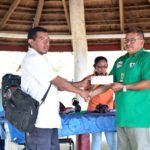 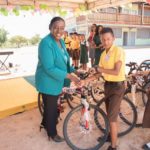 Minister of Education, Hon. Nicolette Henry, handing over a bicycle to one of the Annai students.

Surama, North Rupununi, received the sum of $1.5Million for the construction of the Surama Eco-Lodge’s main benab and another $500,000 for the establishment of a fruit farm. Kwatamang also received $500,000 for a Fruit Farm. While Fairview Village will finish the construction and stocking of their village shop with the $1Million they received.

Delivering opening remarks at the ceremony, Prime Minister Moses Nagamootoo reminded that it was under the Coalition Administration that emphasis was placed on the development of Indigenous peoples.  Communities now have better roads, access to water, better education and health, and more funding became available for community economic ventures, he said.

Prime Minister Nagamootoo noted that for too long, the Indigenous peoples were treated as ‘Cinderella;’ something that has changed under the Coalition Government.

Previously on Thursday, Minister of Indigenous Peoples’ Hon. Sydney Allicock handed over $3.5Million in grants and an All-Terrain Vehicle (ATV) valued at $2.6Million to communities in the South Pakaraima District.

Paipang, Tiger Pond and Karasabai received $500,000 each to embark on fruit farm projects; while Taushida received $1Million towards the repair of their village tractor to continue their agriculture and lumber ventures, and $1Million was given to Yurung Paru for the construction of a Community Centre. The ATV was given to the newly appointed Community Development Officer (CDO).  Paipang also received a generator set and the villages, material for fencing farmlands.