Staff WriterDecember 31, 2016
GINA, GUYANA, Saturday, December 31, 2016
A high- level consultation meeting that had broad representation took place today, to determine the way forward for the ailing sugar industry. Several  other meetings are planned to take place in the new year.
Thee meeting was held  at the Ministry of Agriculture’s Boardroom, Regent Road and Shiv Chanderpaul Drive, Georgetown,
In attendance were  members of the Opposition-Clement Rohee, Irfaan Ali and Juan Edghill, Minister of State, Joseph Harmon; Minister of Agriculture, Noel Holder; Social Protection,  Volda Lawrence; Public Security,Khemraj Ramjattan; and Natural Resources,  Raphael Trotman, and representatives from the Guyana Labour Union, (GLU), Guyana Agricultural and General Workers’ Union (GAWU), the National Association of Agricultural Commercial and Industrial Employees (NAACIE), GuySuCo and several sugar workers.
Minister Ramjattan who spearheaded the meeting, said that a major decision was made at a Cabinet meeting, that consultations must be held on the way forward for the sugar industry.
Minister Ramjattan revealed that some documents were shared for the first time with the Opposition and the unions such as the Commission of Inquiry’s (COI), proposed plans for diversification among others.
The Public Security Minister stated, “The positions that were proposed to us by GuySuCo were shared, and they said that they need time to study them, and we agreed with that, but indeed (because) they only got it this morning. They have asked for some further additional reports and studies as to what made GuySuCo come to this decision. I agree with them because they must have the source document.”
Minister Ramjattan pointed out that there was some criticism with regards to the late  handover of the documentation.
He further explained, “It is important that they ( stakeholders) be part and parcel of the decision making or at least know how we are thinking and that is important. So it has been deffered to another date and until such time as they go through the documents that we give them, the options from GuySuCo, the diversification options for certain estates and so on…I am very pleased with the entirety of the meeting and we are going to continue the process.”
Minister Harmon said that he was instructed by Cabinet at the last meeting to invite the Opposition and the unions within the sugar industry to the meeting.
“I am pleased with the turn out today. We had the opposition political party. We had GAWU, NAACIE and the various representatives from the estates across the country, and I think that they all understand what the position is as we shared some documents with them. I believe that we will have some fruitful consultations going forward,” the Minister said.
Minister Harmon said that the industry is a very important one, and it is of national significance, and as such decisions that will be made must take those aspects into consideration.
GAWU’s Komal Chand in brief remarks expressed satisfaction that the meeting was held. He pointed out that assurance was given by the Government delegation that the proposals that the parties were presented with today, are for discussions.
“It is not a case where decisions are made and we are going through an exercise that is satisfactory to us. (We) are hoping that indeed that they are proposals and out of representations we will make suggestions, backed up with good supporting evidence as to why a particular proposal should not be accepted and why this one should be accepted,” Chand said.
Chand added that good decisions and progress will be in the interest of the industry, the people and the economy.
Meanwhile, NAACIE’s General Secretary, Kenneth Joseph noted that some of the information  received today  was new to them.
Joseph said that the important thing is that any decision that is to be made on GuySuCo will only be made after the ending of the discussions. “We are now preparing for another meeting, we are hoping that it will be as fast as possible, maybe in a week or so. I am very satisfied with what was said today, everyone put their plate on the table,” the NAACIE General Secretary said.
No decision was made as to when the next meeting will take place.
Minister Holder at his year- end press conference on Thursday, said the sugar industry is no longer profitable and that GuySuCo has been unable to self-reliantly secure the future of the industry.
Government subsidised the operations of the industry in 2016 to the tune of $9B.
By: Gabreila Patram 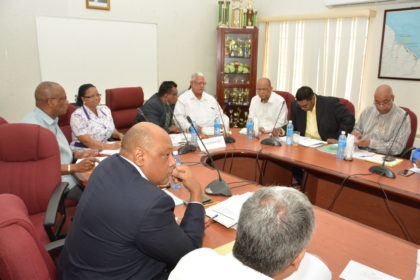 Government, opposition and Union representatives at the high-level meeting on the way forward for the sugar industry

Government, opposition and Union representatives at the high-level meeting on the way forward for the sugar industry