His Excellency President David Granger has accepted the Letters of Credence from Australian Non-Resident High Commissioner to Guyana, Bruce Lendon.

Wednesday’s ceremony was done in the accreditation room at the Ministry of the Presidency in the presence of Foreign Affairs Minister, Hon. Dr. Karen Cummings and Permanent Secretary of the ministry, Charlene Phoenix. 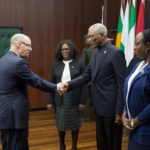 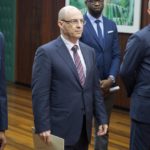 While congratulating the High Commissioner on his appointment, President Granger expressed Guyana’s appreciation for the support it has received from the Commonwealth of Australia.

“These adverse and environmental events highlight the need for immediate and decisive global responses to protect the environment and indeed to protect our humanity. Guyana and Australia share a common interest in the preservation and protection of the environment,” the Head of State remarked.

President Granger expressed Guyana’s eagerness to collaborate on that front.

Meanwhile, High Commissioner Lendon in brief remarks stated his intent to strengthen the ties between the nations.

“As Australia High Commissioner to Guyana, I look forward to working closely with you and the Guyana government to enhance the strong relationship between our two countries.”

Guyana and Australia have enjoyed cordial relations since the establishment of diplomatic ties in 1973.