Minister within the Ministry of Communities, Valerie Adams-Patterson expressed her joy in being at the newly established town of Bartica to present  the subsides. 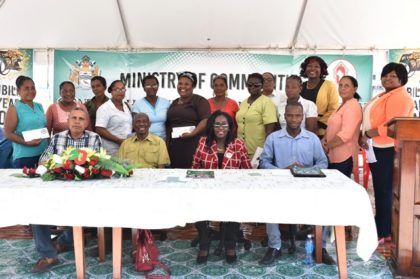 Head Table from Left-Gordon Bradford Regional Chairman of Bartica, Hamilton Green, Chairman CH&PA Board, Hon.Valerie Adams-Patterson Minister within the Ministry (Housing) and Gifford Marshall Mayor of Bartica with the recipients of the CH&PA home improvement subsidy.

The Minister reminded that the subsidy is part of giving back to the people of Guyana for the 50th  Independence anniversary.

Adams-Patterson noted that this project was started in Georgetown last Friday. She told the residents of Bartica that “they are a lucky set of people,” but the only disappointment that she had was that only 12 persons were receiving the subsidy in the newly formed town, “Which means that either some people did not know about the promotion or some people did not pay attention.”

Adams-Patterson also highlighted that giving the subsidies in Bartica is part of the “Good Life which Government promised”, adding that the residents will be hearing from the Ministry as it relates to the Duplex Homes soon. The Ministry is currently examining this initiative.

Bridget Mittleholzer -Tobin speaking with the Government Information Agency (GINA), stated that, “I am very happy to be to be a beneficiary of the subsidy that the Government has given us and I will be using it  to develop my toilet facilities.”

Sheron Thomas stated, “I was so happy when I got the call and they said that I am beneficiary of the voucher.  I will be able to construct my trestle,” she said.

Minister Adams –Patterson also  told the recipients of the subsidies that it can be used to repair their steps, doors, paint the exterior or interior of their house or even fix their roofs.

Senior Community Development Officer, CH&PA Donell Bess-Bascom explained that the vouchers for hardware supplies to effect repairs to their homes will be redeemable at pre-approved suppliers from December 1 to January 31, 2017.

Providing affordable and adequate housing is a part of government’s effort towards creating communities “with necessities for wholesome and dignified living for citizens in need” as outlined by President David Granger in his address at the opening of the eleventh Parliament.