Aspiring doctor, Mahendra Phagwah seems like a typical twenty-year-old; eyes set on achieving his life’s goals and hoping to break away from the overprotective shield created by his parents. However, things cannot be further from the truth.

Both of Mahendra’s parents are differently-abled and unable to hold proper jobs, which has placed a huge financial burden on the family. There have been trials and tribulations but there is also a light at the end of the tunnel. 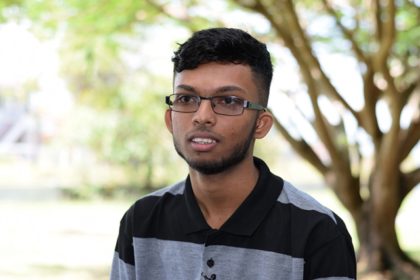 Chatting with the Department of Public Information (DPI), and reflecting on his past, Mahendra recalled facing financial issues, bullying, illness, and alcoholism. Graduating in 2009 as one of the top five students was a breeze, and it landed him a place at the New Amsterdam Multilateral School but he was later transferred to Berbice High School for various reasons.

“Whilst attending Berbice High School (BHS) it became very difficult because of my parents’ disability, it is hard for them to have a proper job so we struggled financially that forced me to travel to the Berbice side with my bicycle.”

During his first three years, at secondary school, he would often fall sick; following a medical check-up he was diagnosed with a heart condition that forced to stop riding to school.

Mahendra recalled the financial and emotional toll of battling his father’s alcoholism. “I remember many nights I would lie in my bed and I would think how could a father cause his child this (trouble). But my dad is impaired and it is very hard for him to understand (my point of view) but it still placed that challenge on me.”

Sadly, the school did not prove to be the refuge he hoped it would be. Mahendra had to tackle bullying from persons he thought were his friends which led to his dropping out. “I was a soft kid growing up and even though I was very strong in terms of taking care of my parents it was hard for me when people would say certain things that would bother me. You know you have your problems at home and then you would go to school and expect it to be stress-free, filled with laughs but it was hard for me too”, he explained.

Making the decision to halt his education seemed at the time a good idea but he always felt unfulfilled. Knowing he was fully capable, he sought the assistance of a local NGO, MMP Foundation for Excellence, friends, and family and sat the Caribbean Secondary Education Certificate (CSEC) examinations. He attained 13 subjects.

Today, he is currently job hunting so that he can provide for his family. He reflected that while growing up, persons have generously assisted him, but now he is seeking independence. “I just want to make a name for myself, I want to look back 20-years from now at my story and say that I have made this far.”

Mahendra revealed that persons have criticized him for telling his story and even accused him of using his parents’ disability to garner sympathy. For his part, he feels sharing his life story (thus far) and all the obstacles he has overcome, is empowering.

“Whenever I share my story it empowers me some way or the other. It makes me strong because I know people out there know my story and when they would message me and tell me their stories, it motivates me, it tells me that I am not alone and I can do better for myself and family”, he said.

Upon advice given, Mahendra has created a GoFundMe page which aims to obtain (monetary) funds to establish a travel agency along with several other department stores. He plans to have his sister manage the operation when he pursues further studies to become a doctor.

“I want to start studying medicine in September. However because of my parent’s financial difficulties and the fact that they are getting old, I do not want to be selfish and pursue my career and let my parents suffer so I decided to take a year off to be able to build a foundation (business) before embarking on my career.”

The young man hopes to give back to society, noting that campaigning in the field of education is definitely one of the roads he wants to take. He plans to help address the issue of bullying at school and students who drop out due to family or financial difficulties. He opined that while vocational courses are available, attaining CSEC subjects will take them further.

Mahendra is also involved in numerous volunteer efforts including engaging with differently-abled persons; advocating on social issues such as domestic violence and suicide and uplifting and positively inspiring his large Facebook audience.

‘It takes a village to raise a child’ and Mahendra’s community is proud of him. He recalls as a little boy, persons in his community looked out for him. “I would go to school but my parents were never able to purchase a book for me so my teachers would call me aside and give me free lessons. Persons would also give me a $1000 and say take it and do the best,” he explained. Today, many of his current friends are former bullies since he thought it best to forgive and move on. They have wholeheartedly encouraged him to further his studies.

The young man is extremely grateful to everyone who supported him in obtaining his CSEC subjects. Mahendra added that obtaining his CSEC subjects was an achievement which he was especially proud to show his parents. He explained that through the difficult times, his admiration for his mother grew because of her work ethic to provide for him and his sister. Though they are unable to fully comprehend his accomplishment, due to their disabilities, his parents are nonetheless happy for him.