The government continues to fulfil its mandate and engage residents at the grassroots level. It revisited the Mahaica-Berbice Region on Sunday. As usual, ministers and government officials fanned out across the region and conducted community meetings in several areas.

In Blairmont, residents turned out in their numbers where they wasted no time in raising their issues with Prime Minister, Hon. Moses Nagamootoo and Minister of Communities, Hon. Ronald Bulkan.

Residents at the community meeting.

During his remarks, Prime Minister Nagamootoo commended the residents for taking advantage of the opportunity.

“This is what this meeting is about, and our outreaches throughout Guyana have been able to make connections with ordinary folks in the villages who have problems but find it difficult to have them solved,” he said.

After listening to their concerns attentively, Minister Bulkan gave full assurance that the issues raised will be addressed. He noted that since assuming office, the Coalition Government has ensured that every community across the country has benefited.

“The records are there to show that budgetary allocations are made without focus on political allegiance and political loyalties. We understand that Guyana belongs to all of its people, and this is the philosophy that underpins this administration.”

Speaking to the Department of Public Information (DPI), residents expressed their appreciation for the opportunity to interact with the government officials. Janelle Dover, a bus warden, left the meeting satisfied knowing that a new school bus will be procured in 2020.

According to her, a new vehicle would be welcomed in the region. “I am very happy to know that the ministers could come to the people and listen to them,” she remarked.

Eshri Persaud and Lennox McDonald both expressed satisfaction to be able to interact with the government officials. They commended the government for taking the initiative to meet with the people and address their concerns.

The residents were also reminded that through unity, there will be national growth and development. 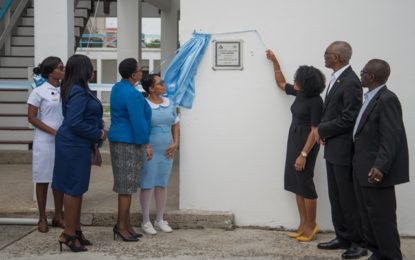