The deadline for the report on the Commission of Inquiry (COI) into the state of the education system has been extended by a month.

During an interview with the Government Information Agency (GINA), Technical Advisor, Tertiary Education to the Minister of Education, Vincent Alexander had stated that the report of the COI will be completed by the end of the month.

Addressing the media at the post-Cabinet press briefing at the Ministry of the Presidency on Thursday, Minister of State Joseph Harmon however, explained that the COI Commissioners had asked for up to the end of April to produce that report. He explained that Cabinet has chosen to grant the one month, because of the importance that the final document would play in addressing the revamping of the system, to provide quality education, to the nation. 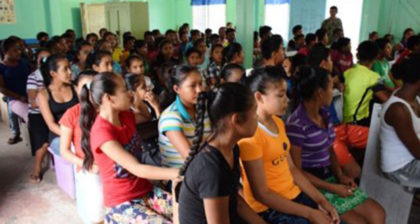 Flashback, September 2016, Stakeholders at the Commission of Inquiry (COI) into the state of the education system consultation in Moruca, Region One

In its effort to review, revise, and upgrade the nation’s education system, the government in April 2016, launched an inquiry into the education system, with the aim of gathering “evidential bases” for the revision, upgrading and extension of the system.

The COI, set up to conduct this probe, would have held hearings across the country with parents,  guardians, teachers, religious leaders, unions and the private sector  on their perception of the state of the education system, as well as recommendations for its enhancement. These series of engagements stretched into late November, with the COI having a number of extensions.

When presented, the recommendations of the COI are expected to feed into the administrative policy and legislative process to govern the education sector.

Education has been one of the areas that the government has been most vocal about. President David Granger and Minister of Education Dr. Rupert Roopnaraine have both repeatedly said that every child deserves a good education and that the public education system should be able to shoulder that need.