CDC looking at ways to address flood risks at Region 10

The Civil Defence Commission (CDC) was in Coomacka evaluating the risks and hazards in the community as part of creating a Regional Disaster Risk Management Plan for Region 10. 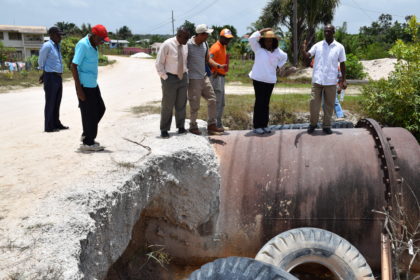 The small community of Coomacka is easily flooding during the May/June rains and periods of intense rainfall.

Dexter Harding, a resident of Coomacka and Councillor on the Region 10, Regional Democratic Council (RDC), explained to the CDC officials that during periods of heavy rainfall, there is erosion of the revetment around the community and this result in flooding.

Harding said that the flood waters bring sand and sediment from old bauxite mines around the community and deposit it into the Demerara River which borders Coomacka. He said the siltation of the river also contributes to flooding.

The Councillor also noted that the erosion has led to the bank of the river being expanded which has narrowed the water channels.

“This is something that if we don’t really rectify it urgently or put a study to it, it would destroy homes, destroy livestock, our garden and many other things in the community,” Harding explained.

CDEMA is funding the development of the Regional Disaster Risk Management Plan in Regions Ten and Nine. The Euro 60,000 fund will go towards developing a isk profiles for the regions.

Grosvenor added that from her assessment, “There needs to be a much more comprehensive study of what is coming down…the sort of 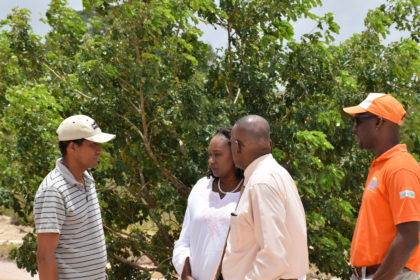 material that is being moved.”

Major Craig told the Government Information Agency (GINA), that Coomacka was one of the high risk areas that the team would visit to capture information necessary for developing a disaster risk profile.

Craig noted that preliminary studies indicate that Coomacka is a high risk area and could be targeted for the establishment of a Community Based Disaster Risk Management Committee to help address the risks of flooding.

The CDC conducts detailed risk assessments in communities that have been identified as high risk. Major Craig explained that the assessment includes evaluating vulnerabilities, hazards and capacities of such communities.

“The CDC will work with the community in a consultative process to identify the hazard and develop a system that is geared to responding to a Region’s particular disaster,” the CDC official explained. 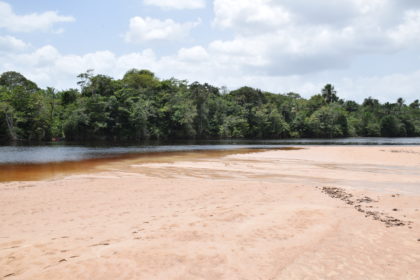 Still in the early stages, the Regional Disaster Risk Management Plan will equip the region and communities to adequately respond if there is a disaster as well as work to tackle the risk factors that lead to disasters.

Meanwhile, Harding said he is confident that CDC’s efforts will not only bring relief to residents of Coomacka but also to those communities further along the river. “On the level of the community, I see that people from the other communities they will have a broader channel to bring down their logs, their produce and so on from up in the river,” Harding said.

Residents of Coomacka work at the bauxite mines or rely on subsistence farming and logging to sustain themselves. Harding told GINA that approximately 800 persons live in the community.

The CDC has already completed Regional Disaster Risk Management Plans in six Regions: One, Two, Three, Five, Six and Seven. Major Craig said that plans for regions Four and Eight should be completed by the end of the year.