The impacted communities include Blenheim, Success and Amsterdam.

When the team arrived on the island on Saturday, the water had completely receded. The residents commended the Civil Defence Commission (CDC) for their swift response in providing relief to affected households. Transportation to the island was facilitated by the Coast Guard, who regularly assists the commission in the execution of such exercises. 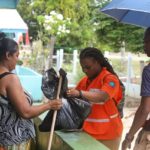 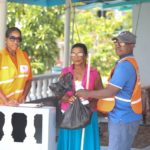 scene from the distribution exercise. 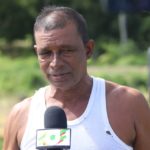 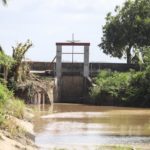 One of the kokers which was breeched.

Speaking to the DPI, National Drainage and Irrigation Authority Senior Engineer with responsibility for Region 3, Lall Peterdeo stated that the initial assessments indicated that the flooding was as a result of multiple kokers being breached.

“We here as a result of reports we received yesterday of persons removing the (koker) doors to take in water for irrigation purposes…our concern is the way this was done,” he said.

According to the NDIA official, while it is understood that the farmers needed irrigation for their crops, the situation should have been monitored more effectively.

Several residents also voiced their opinions and criticised the Neighbourhood Democratic Council for the haphazard manner in which they allow farmers to irrigate their fields. One resident, Rohan (only name) told DPI that while it is a common practice to remove boards on the koker doors to irrigate the crops, this is the first-time water levels have been so high. He explained that permission was granted by the NDC on Wednesday.

“Normally, two boards are removed from the outside door to allow water to enter but no one from the council came to monitor the situation and when I came to the koker, I saw four boards were removed,” he related.  This, Rohan explained, caused more than the required amount of water to enter the trenches which resulted in the flood.

He also disclosed that the boards were left on the sea defence and were only replaced on Friday evening after the tide had receded.

Other residents also called on the NDC to clean the island’s drains and canals to ensure proper drainage and irrigation.