He was at the time making an address at the opening of the ministry’s knowledge transfer in risk management and safety school one-week session at the Herdmanston Lodge. 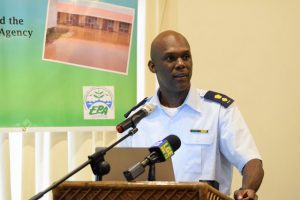 “The goal of Safe School is to create safe, secure, protective and green educational institutions from nursery to secondary levels, including both public and private, through simple and adaptable tools. Equally important is the equipping of personnel to prepare themselves to protect those in their charge,” Lt. Colonel Craig said.

He further advised that “buildings and facilities be retrofitted and equipped with the necessary elements to make the environment safe.”

In 2012 and 2017 respectively, Lt. Colonel Craig said the commission retrofitted the Arapima and Fort Ordinance primary schools as emergency shelters. The Fort Ordinance primary school is now equipped with a concrete bridge to allow delivery of relief supplies directly to the building. It also has bath facilities, ramps and handrails to improve the accessibility for persons living with disabilities, a newly constructed kitchen, cooking utensils and a feeding area.

Additionally, the CDC with funding from the United Nation Education Science and Culture Organization (UNESCO) implemented a youth engagement for community-based Disaster Risk Management Project in several schools across the country. He said the project was designed to promote disaster risk management awareness among youths and ensuring their active involvement in building community reliance.