Attorney General (AG) and Minister of Legal Affairs, Basil Williams, S.C., says the work of judges and prosecutors is critical to consolidating stable and effective institutions of integrity, transparency and the rule of law. 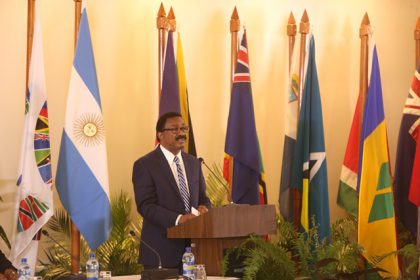 Speaking at the opening of the Caribbean Financial Action Task Force’s (CFATF) Judges and Prosecutors Anti Money Laundering and Countering the Financing of Terrorism workshop this morning, the AG noted that these features are the pillars of a robust anti-money laundering regime.

The Attorney General pointed out that the region’s overall rate of convictions and confiscation of criminal proceeds have been moderate, despite many countries implementing legislative measures to criminalise money laundering and terrorist financing, as well as proliferation financing.

If the global AML/CFT efforts are to be effective, Minister Williams proposes that countries “also obtain convictions and pursue seizing and confiscating the proceeds and instrumentalities of crime for the benefit of States and victims”.

He added that Countering Violent Extremism (CVE), is an important element in the fight against extremists who seek to recruit, radicalise and mobilise their followers to commit acts of violence.

The workshop will provide a platform for gathering and sharing experiences, challenges and best practices in investigating and prosecuting money laundering and terrorist financing, as well as depriving criminals of their proceeds.

Issues relating to investigative orders, the prosecution and management of Money Laundering Cases, International Co-operation, confiscation and restraint orders, conviction-based confiscation and terrorism/terrorist financing will be the focus over the two days.

The Financial Action Task Force (FATF), as part of its ongoing outreach to the Prosecutorial Services and Criminal Justice System in member states, has conducted similar workshops jointly with FATF Style Regional Bodies (FSRBs) in Quito, Ecuador in September 2017, in Shenzhen, China in January 2018, in Tunisia in February 2018 and more recently, Strasbourg, France in March 2018.