A senior government official from Brazil’s Ministry of External Relations has revealed that the commitment to build an all-weather road from Lethem to Linden remains a priority for the country even with a change of government.

Head of the Division of Venezuela, Colombia and Guyana, Ana Beatriz Nogueira, recently said the “the organs responsible for infrastructure in Brazil are aware of the strategic importance of the Linden-Lethem road.”

She further explained that while some key appointments are political in nature, the Secretary of Infrastructure assured that the necessary budgetary arrangements have already been made.

“They have a technical corps that is not usually affected by political changes,” she said.

Ms. Norgueira led a delegation of some 30 officials from various agencies in Brazil to meet with Guyanese counterparts at the Seventh Meeting of the Bonfim-Lethem Border committee that was held in Bonfim on October 30 and 31, 2018.

“The paving of 454 kilometres of the Linden to Lethem Road and the construction of a deep sea port remain priorities on the infrastructure agenda for Guyana,” he expressed.

The Linden to Lethem roadway is being done in phases, starting with the approximately 125 km section from Linden and Madura Hills. Some US$120M has been guaranteed by the United Kingdom Caribbean Infrastructure Partnership Fund (UKCIF) and the Caribbean Development Bank (CDB). 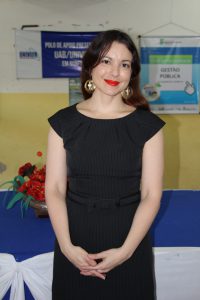 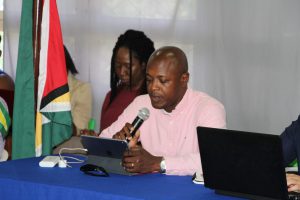 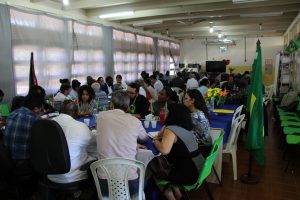 In his update at the meeting, the Chief Planning Officer stated that a recently identified international engineering firm is expected to begin the design process in January 2019 which is expected to last for 10 months.

The Guyana-Brazil Joint Commission on Infrastructure is pursuing the detailed designs for Phase 2 of the project, which is the 320 km section between Mabura Hills and Lethem.

“We are looking forward eagerly to the day when the journey between Georgetown and Lethem is reduced to a mere 4 hours,” Thompson added.

Meanwhile, a study is being conducted by a firm from the Netherlands to determine the location for a deep sea port close to the mouth of the Demerara, Essequibo or the Berbice River.

“Once completed, Guyana will advertise for expressions of interest from national and international firms desirous of constructing and operating the port in a public private partnership with the Government of Guyana,” he revealed.

Despite looming implications of political changes in Brazil, the border committee made progress on a number of issues including the reestablishment of the Bilateral Commission on Police Cooperation and Drugs with its first meeting set for March 29, 2019. During the discussions, representatives in the security forces of both nations committed to working closer to curb cross border crime. Brazil has agreed to offer training in the initial instance to 10 Guyanese police officers in identifying vehicular theft.

The two sides were also able to agree on collaboration to combat plant diseases, particularly the Carambola Fruit Fly, which has had implications for trade.

Guyana and Brazil have agreed to meet again shortly to evaluate areas of cooperation.