Chile’s President arrives in Guyana for meetings with CARICOM Heads

Chile’s President, Michelle Bachelet, today arrived in Guyana as the 37th Regular Meeting of the Conference of Heads of Governments of the Caribbean Community (CARICOM) opened in Georgetown.

President Bachelet was received at the Cheddi Jagan International Airport by Guyana’s Prime Minister, Moses Nagamootoo along with her delegation of approximately 70 persons. 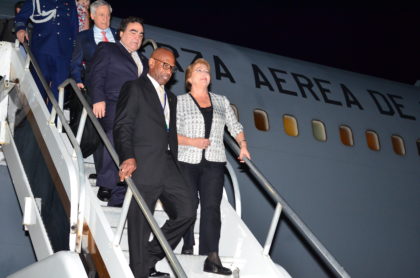 Chile’s President – H. E Michelle Bachelet as she makes her way off Chilean Air Force One

Speaking with the Government Information Agency just prior to the arrival of the Chilean President, Prime Minister Nagamootoo described Chile as a country of “great democracy” and one from which Guyana can learn.” It is one of the fastest growing economies concentrating more on manufacturing and processing,” Nagamootoo noted.

He said that the visit by the Chilean Head of State signals greater collaboration and cooperation between Chile and CARICOM. “For the Caribbean we have to move away from this mono-culture economy to scientific revolution and Chile has been developing in that direction,” Nagamootoo noted.

Expressing gratitude to the Prime Minister for hosting her and her delegation, President Bachelet shared a few light moments before departing the airport lounge.

Though she was not at the official opening ceremony of the CARICOM Heads of Government Conference, CARICOM Secretary General, Ambassador Irwin La Rocque, did say that President Bachelet is expected to participate in bilateral talks with member states.
Guyana and other CARICOM countries have over the years shared cordial relations with Chile. An invitation to President Bachelet to attend the Heads of Government conference is aimed at strengthening ties with the South American country. 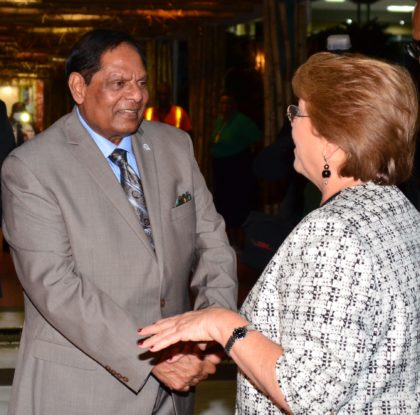 Bachelet’s predecessor, Sebastián Piñera, had attended a previous CARICOM Heads of Government conference in Grenada. “The Community over the past years has made a conscious effort to build relations with our partners in our hemisphere. It is not at the expense of our traditional partners by any stretch of the imagination, but Chile has been a partner to all of our countries bilaterally,” LaRocque said in his address at the opening of the CARICOM Conference.
Noting that Chile is very strong in areas of disaster-related matters and can be helpful in providing scholarships and facilitating capacity-building programmes, La Rocque said issues of the hemisphere will be discussed with President Bachelet.

The CARICOM-Chile Joint Commission was established in 1996. The aim of the Joint Commission is to forge closer ties between CARICOM member states and the Republic of Chile in trade, economic, scientific, technical and cultural areas. There was also the signing of an Agreement on Scientific and Technical Co-operation between both parties. The inaugural meeting was held in Santiago de Chile in June 2003.

Following a nine year hiatus, the second meeting of the CARICOM-Chile Joint Commission took place in 2012.