Minister of Business, Dominic Gaskin, on a recent visit to the chips factory on the island of Leguan, Region Three, expressed satisfaction that the facility is in its final stages of construction. 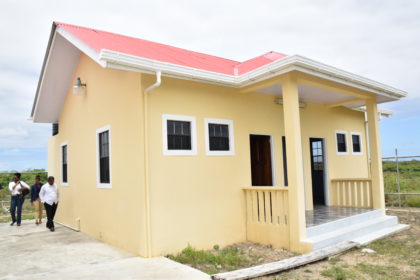 The living quarters of the chips factory

The Minister said, “It’s more or less completed. As you know, this was a project that we inherited and we did suspend the project pending review, and based on that review we decided that we will complete it and then try to turn it over to a private operator to turn (it) into a viable business,” Minister Gaskin said.

The Business Minister said that the Ministry invited expressions of interest for the operation of the factory. He noted that the equipment is already in the Ministry’s possession, which he pointed out was also inherited from the previous administration.

Minister Gaskin told the Government Information Agency (GINA), that the Ministry is currently in discussion with one potential operator.

Head of Industries at the Ministry of Business, Sharon Alexander in an interview with the Government Information Agency (GINA) said that 30 jobs will be created immediately upon completion of the project. She explained that over time, the employment number will increase.

Inside the chips factory located on the island of Leguan, Region Three

Additionally, a road and a bridge to gain access to the factory’s premises have been completed by the government so by at the end of the first half of the year, the factory can become operational and provide some benefit for the community.

The chips factory is one of four projects (two chip factories and two call centres) under the $1 Billion Rural Development Fund (RDF) that were put on hold last year pending a review.

Budget 2016 provided $195M for the completion of remaining works on the projects at Tuschen and Enmore (call centres) and Leguan.

Once completed and operationalised, these projects are expected to increase economic opportunities and capabilities of vulnerable groups within the regions and create over 300 jobs in the rural communities in which they are located. 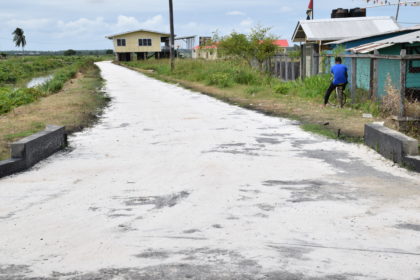 The road leading to the chips factory

Work is currently ongoing to complete the Tuschen and Enmore call centers; however, the Ministry has heeded the advice of the Sea Defence Board and will not proceed with the chip factory in Wakenaam which was built on land that is deemed prone to flooding and erosion.

Three hundred (300) persons within Region Three (Essequibo Islands-West Demerara) are slated to gain employment with the completion of the Tuschen call centre at East Bank Essequibo.

Region Three is largely known as an agricultural district, and the Ministry of Business sees the call centre as a means of diversifying the region’s economic standing.

The project now falls under the Ministry of Business’ Rural Development Project and will be completed in June.

The Ministry of Business will seek potential investors and make the necessary investment once the call centre is completed and operationalised.