The fireworks flew as the Mashramani 2020 Chutney dance finals concluded in the wee hours Sunday at Rosignol Stelling Road, in Region 5

When the smoke settled, reigning Chutney Champions for the past two years, Berbice Delight outshone their competitors in the group category, to take the title for a record third time.  Vanie Dance Academy and Sankalp Dance Group won second and third respectively. 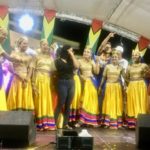 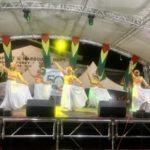 Some members of the Berbice delight dance troupe during their performance. 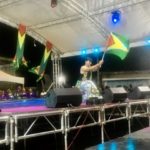 A dancer entertains with his energetic piece. 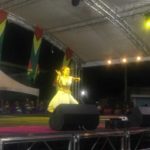 A dancer showcases her talent. 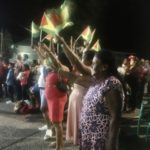 Members of the audience waving the Golden Arrowhead as they supported the dancers.

While Geetanjali Ramkellawan of Canal Number 2, proved she was too much to handle by copping the coveted best chutney dancer crown as Tiffany Albert secured the second spot with her exhilarating dance moves while Aneesa Narine and Vanie Harnauth tied for the third position.

Organised by the Department of Social Cohesion, Culture, Youth and Sport for the third consecutive year, the competition saw performances from fourteen contestants in the individual category and seven performances in the group category.

Patriotism was the common theme portrayed as each choreographed piece paid homage to Guyana’s Golden Jubilee as a nation,

Some dancers lined their costumes with the colours of the national flag while others used flags or props in their performance to depict same. Several members of the audience were also seen waving the Golden Arrowhead as they supported their favourite performers.

Earlier on in the evening performances by AW Lyrical and Stephen Ramphal kept the audience entertained and wanting more and providing a taste of what to expect in the Chutney Song finals on Fenrir 23.

Many patrons said they were pleasantly surprised with the intensity and level of the competition and are eagerly anticipating the next event.

“It was great to see our very own perform with such skill and competitiveness in every aspect. It really made me feel proud as a Guyanese to witness our local dancers and singers performing like international artistes especially wearing Guyana colours” an overseas-based Guyanese, who is visiting, told the DPI.

Fireworks lit up the sky as the winners were announced adding an extra sparkle to the evening.