– businesses that have evidence of underhand activities should report to GRA

The efforts by the Guyana Revenue Authority (GRA) to put a handle on smuggling, has been boosting the profits of many local businesses, Minister of Finance Winston Jordan said on Monday.

During a visit to Tandy’s Manufacturing on the East Bank Demerara, Minister Jordan said that the work of the GRA’s Law Enforcement and Investigation Division (LEID) continues to bring economic relief to many businesses. 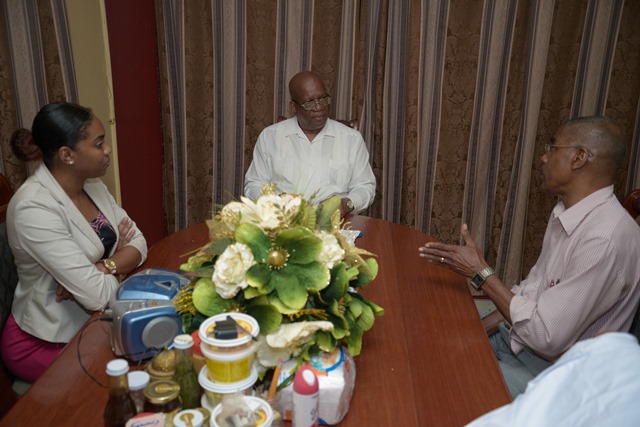 Minister of Finance Winston Jordan listens to Director of Tandy’s Manufacturing Burt Denny during a visit to the company on Monday.

“Certain industries are celebrating how much profits they make without saying that is partly due to the reduction of smuggling of certain goods. These industries are making even more profits. Massive profits are being made in the local industries,” he said during an engagement with company Director Burt Denny.

Denny had expressed the difficulties his company experiences, especially in producing peanut butter at the manufacturing entity. He said peanuts are being smuggled from neighbouring Suriname and are sold at costs higher than the actual finished product.

“When they bring peanuts and they sell it in the market, you have it retailing at the price that you’re trying to sell the actual peanut butter. In-house calculations would find that the bottled peanut butter is being sold cheaper than the peanut itself,” Denny told the minister.

Minister Jordan said in such a case, businesses that are aware of underhand activities should report the smuggling to the Guyana Revenue Authority (GRA).

“I can tell you that with the existing revenue commissioner, lots will happen,” he said.

The minister said there remains a challenge in the smuggling of all kinds of products, including those in the food industry as there still are some porous borders and “individuals.”

Up to last year, the Law Enforcement and Investigation Division of GRA was able to recoup hundreds of millions of dollars in Customs Duties, Excise Taxes, Environmental Levy and VAT, and fines from commonly smuggled items such as alcohol, foreign poultry and mosquito coils.

In May 2018, following a sting operation on the Atlantic Ocean, officers intercepted a motor vessel containing hundreds of boxes of foreign poultry and mosquito coils. The captain and two sailors on board the vessel were apprehended and placed into custody.

GRA had said that the LEID operation demonstrates its commitment to deterring, disrupting, and prosecuting individuals who attempt to import prohibited items, and evade the payment of their fair share of duties and taxes.