The May 2015 APNU+AFC administration was heralded by many as a brave new departure for Guyanese politics. Four years on, Director General of the Ministry of the Presidency Joseph Harmon has loudly proclaimed that the Coalition has been a success and is leading the socio-economic transformation of Guyana

“Some the distance voices say that the Coalition will not work, but this Coalition is working well,” Harmon said during the APNU+AFC rally at Leonora today 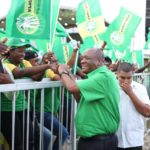 Director General of the Ministry of the Presidency, Joseph Harmon greets supporters as he makes his way to the stage. 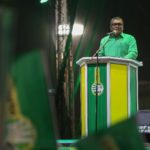 Regional Information Officer for Essequibo Islands-West Demerara, Ganesh Mahipaul during his address to the gathering. 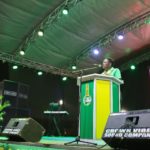 The Director-General saluted His Excellency President David Granger for creating an administration comprising six parties of all ethnicities and background. “I salute you, Sir, for taking six parties and make it work…we are better together,” he declared.

Harmon reminded those gathered that it was the astute leadership of His Excellency President David Granger that wrought the transformation development witnessed across the country.

DG Harmon noted that the President was instrumental in ensuring Guyana’s standing in the CARICOM region was once again elevated.  “Caricom is central to us. Because of the energy which you have given to Caricom, no longer do we have the ‘Guyanese bench’ in Trinidad or Barbados. No more Guyanese benches. People from all over the world are coming to our shores to be part of what is taking place here.”

Also speaking was Essequibo Islands-West Demerara Regional Information Officer Ganesh Mahipaul and Legal Officer at Maritime Administration Department and resident of Region Three Thandi McAllister. The duo outlined them numerous development projects and initiatives, especially in infrastructure and education, that the region benefited from under this administration.

According to Mahipaul, it was the Granger-led administration, that the academic performance if the region was vastly improved. “It was under this government that we received the school feeding programme for the first time. We have buses and boats, bicycles, boots and books; and children are going to school because we understand that if we are to lift this nation out of poverty, we have to do it with education,” he emphasised.

McAllister outlined the billions of dollars spent on upgrading roads and constructing bridges in the region.