Collaboration intensified for the fight against Breast Cancer

Breast Cancer Awareness month is being observed in October 2016 and stakeholders  are collaborating to end the scourge with early detection by creating awareness of the risk factors . 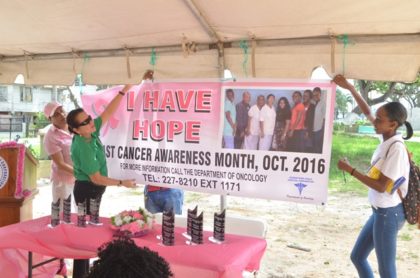 It has been noted that breast and other forms of cancers have been one of the leading causes of death in the Caribbean since 2000. A number of statistics were highlighted to be used as a platform to further intensify the awareness campaign in the fight against breast cancer. Minister of Public Health Dr. George Norton, indicated that the month of October is that period which has been set aside to focus specifically on breast cancer awareness.

“A ten year cancer profile for the year 2003 to 2012 showed that the breast cancer was the most common sight of cancers recorded in the period with 1090 cases. October is the month when we redouble our efforts towards stressing importance of early detection and treatment as well as palliative care for this disease and I cannot stress more the importance of early detection and treatment.” Minister Norton said. 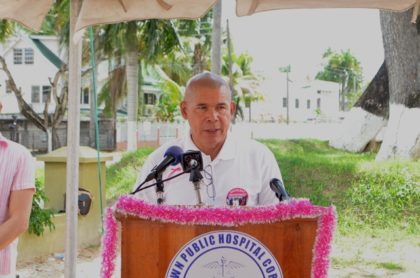 Speaking on the impact of the prevalence of cancer, Dr. Morris Edwards, Head of the Health Sector Development Unit (HSDU) said that, “for the year 2000 when the Guyana Cancer Registry was established and started to systematically collect information on cancers we have actually recorded 8153 cases of cancers, the bulk of those cancer cases are breast cancers. As a matter of fact breast cancers are just under 17 percent of our cases.” 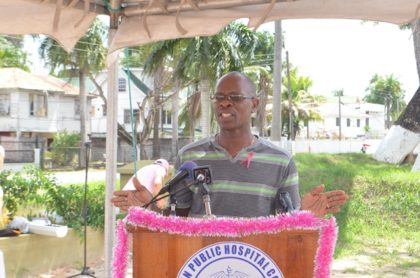 Dr. Morris Edwards, speaks on the impact of breast cancer in the Guyana and the Caribbean.

“Data shows that almost two third the cases of cancers, in anyone of those time periods were in women.” Dr. Edwards pointed out. It had been noted that, men can also be affected by breast cancer but women are more at risk and affected earlier with cancer than men.

At the ceremonial launch, two ladies shared their survival stories with the audience, highlighting the challenges they have faced and thanking the doctors and staff of the Oncology department of the Georgetown Public Hospital Corporation (GPHC).

One of the Survivors, Devika Tinsarran, who was emotional throughout her testimony, assured the gathering  that though her life is not the same, she is still thankful for her life and would do all that is necessary to make other women aware of breast cancer. 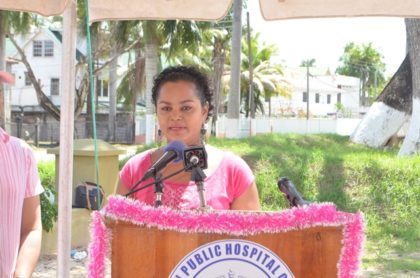 “I didn’t have a family history of it (breast cancer) so I didn’t think it would happen to me, was I prepared for it, I don’t know but I knew I had to find strength to gather courage to go ahead with what was about to happen to me.” 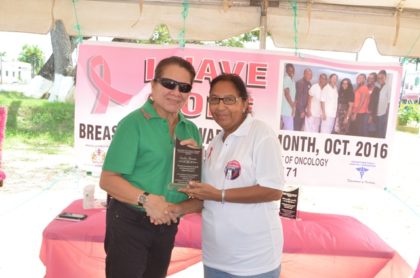 Representatives of the new ‘Giving Hope Foundation’ took the opportunity to present the objectives of that foundation that of caring for women diagnosed with breast cancer, who cannot afford treatment. Some of those objectives were to set up a support system for survivors and relatives, identify risk factors, geographical and ethnic data that would narrow the gaps for breast cancer awareness and to collaborate with government to provide better health care for cancer patients.

The key word that was echoed throughout the ceremony was ‘share’. This was the message to those women diagnosed with breast cancer, for them to tell others about their diagnosis and experiences so as to support each other and to reduce the issue of the breast cancer taboo. 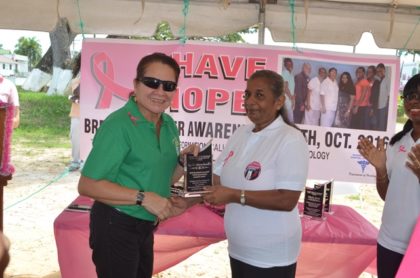 First Lady Mrs. Sandra Granger presents awards of recognition to Chandrawatti Singh Staff Nurse Midwife, who has been working in the Oncology Department of the Georgetown Public Hospital Corporation (GPHC) since 2008

A number of health care professionals of the Oncology department of the GPHC and other cancer care foundations were recognised and awarded for their outstanding services provided to cancer patients.

The Ministry of Public Health together with the Georgetown Public Hospital Corporation collaborates with the Ministry of Social Protection, Guyana Responsible Parenthood Association, Periwinkle Cancer Club, Cancer Institute of Guyana and other organisations on a regular basis to regularly reach out and support the men and women who are at risk of being diagnosed with any form of cancer.

Breast cancer is the result of a malignant tumor that starts in the cells of the breast and can gradually spread to other parts of the body.

With the help of regular self-breast examination, mammography screening, breast cancers can be found at an early stage. The most common sign of breast cancer is a lump formation in the breast.