Georgetown, Guyana – (August 31, 2019): President David Granger, last evening, said the Ministry of Natural Resources, Youth in Natural Resources initiative is a commendable one as it allows young people to see involvement in the extractive industry as an honourable vocation, if done sustainably.

The Head of State was at the time speaking at the closing ceremony of the Youth in Natural Resources III held in the Baridi Benab, State House.

“It involves them in the protection and preservation of the environment. Young people can look forward to a bright future in our natural resources sector, including the traditional sectors. We will continue to support agriculture, logging and mining. These sectors are being aligned along a path of sustainable development. They will remain mainstays of our economy and providers of jobs for our people, including our youth,” the President said, even as he congratulated the apprentices on completing the programme.

President Granger said too that efforts are being made and will continue to be made to protect the environment from the threats posed by extractive industries. He said this will ensure the sustainability of the country’s resources and the protection of citizens.  The extractive industries – logging and mining – despite their measurable economic benefits, are associated often with air pollution, biodiversity loss, freshwater and oceanic contamination, greenhouse gas emissions, land degradation and resource depletion, the President said. 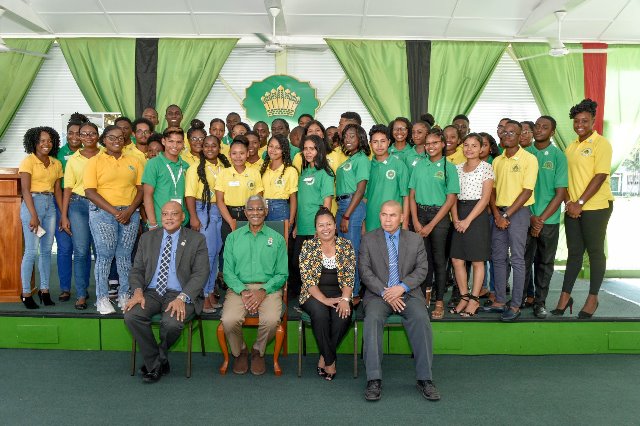 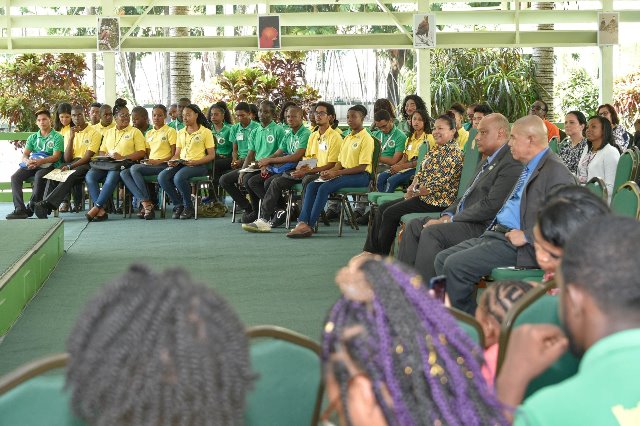 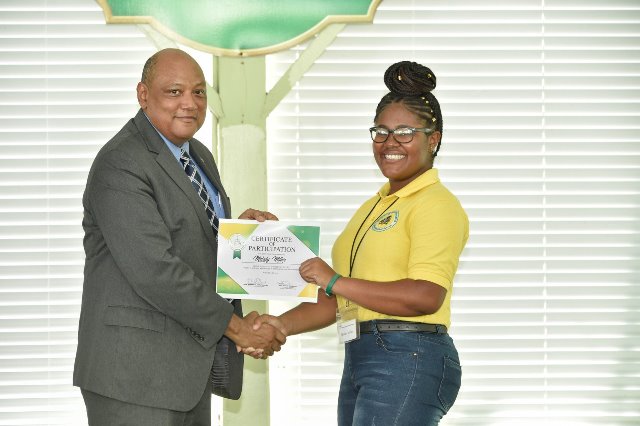 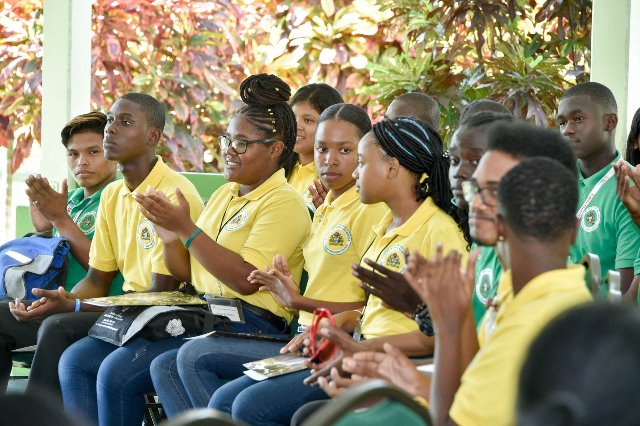 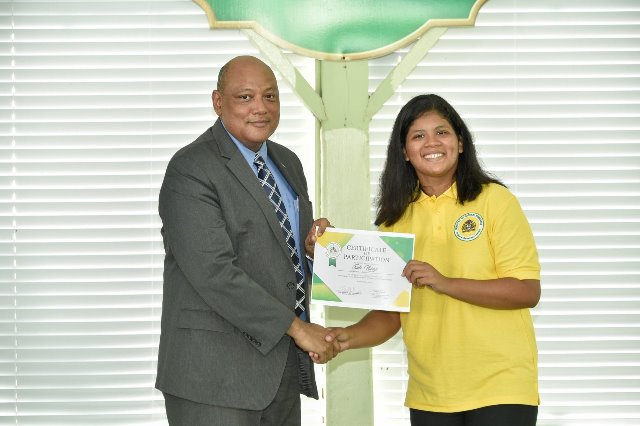 Minister of Natural Resources, Mr. Raphael Trotman presents a certificate of participation to an apprentice. 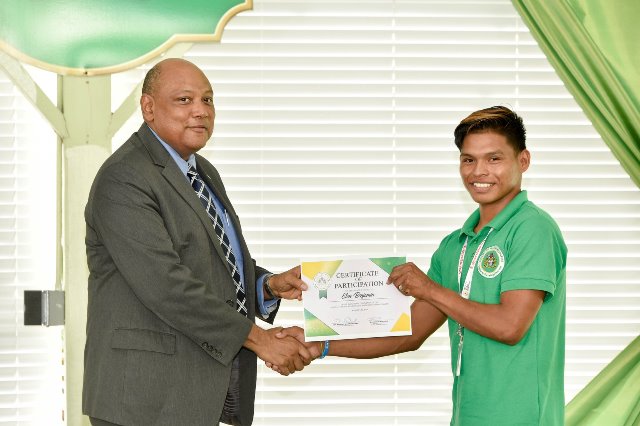 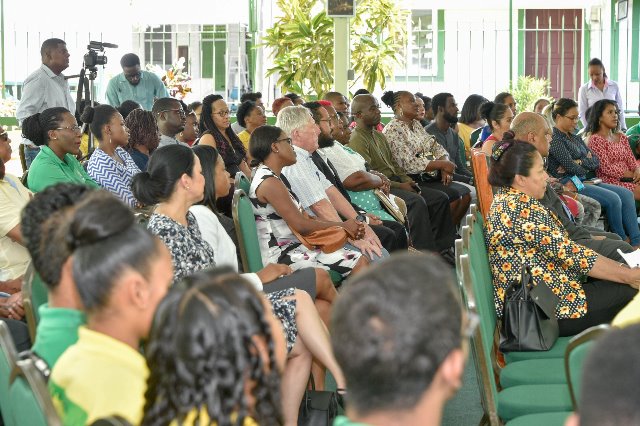 “These industries, therefore, must be developed in a manner which protects the environment,” he reiterated, while pointing to the use of mercury in the gold mining sector.

“It is an amalgam which is used to extract gold from ore. It is a deadly poison which can find itself into the air, soil and rivers. The prevention of mercury pollution is vital to the protection of people’s lives and livelihoods and the sustainability of the environment. Mercury has found its way into the waterways – rivers and creeks – and presents a threat to the country’s aquatic systems and its biodiversity. It can equally leech into the soil and find its way into the food chain,” the President said while noting that Guyana is a signatory to the Minamata Convention on Mercury.

The Minamata Convention’s objective is “…to protect human health and the environment from anthropogenic emissions and releases of mercury and mercury compounds.”

In his address to the 1st Conference of Parties to the Minamata Convention on Mercury, held in Geneva, Switzerland on 28th September 2017, President Granger said:

He reiterated that the “safety of our people and the protection of our environment is our foremost priority”.

“I announced then and I iterate now that Guyana has set itself the goal eliminating the use of mercury. I have flown over, by aircraft, large sections of our country. I am appalled by the large craters left behind by miners. I have seen the destruction to our riverbanks caused by mining.   I have seen the effects of the deposit of mining effluent in our rivers, many of which are still used for cooking, drinking, fishing and washing by riverine communities. Sustainable mining does not degrade our riverbanks and lands or pollute our waterways. I have also seen the large holes carved out of our canopy for foresters. No attempt, in many instances, has been made at reforestation,” the President stated.

President Granger told the apprentices that a sustainable future cannot be bequeathed to the nation’s children unless the destruction to the environment by extractive industries is arrested. He said it is partly for this reason that the Government of Guyana is committed to a ‘green’ development trajectory.

The Green State Development Strategy: Vision 2040, he said, balances development of our natural resources with the protection of the environment.

“The ‘green state’ will demonstrate how our extractive industries – bauxite, diamond and gold mining and logging – can be aligned with the protection of our environment, the preservation of our biodiversity and the promotion of the generation of energy from renewable sources,” President Granger said.

The ‘Strategy’ commits to sustainable forest practices. It includes measures to promote low deforestation, low impact logging, value-added timber production, forest rehabilitation and reforestation.  The he President encouraged the gathering at the closing ceremony to become acquainted with our Green State Development Strategy.

“It will allow you to better appreciate the importance of environmental protection towards sustainable development,” he said.

The Head of State reminded that Guyana is rich in agricultural, forestry and mineral resources which includes bauxite, diamond, fisheries, gold, rice, sugar and timber which have been the mainstays of the local economy for more than one hundred years.

President Granger said Guyana’s traditional natural resources sector is vital to the country’s economy and will remain so even with the advent of petroleum production.

“The traditional natural resource sector will not be neglected but will be supported to continue to contribute to employment, and wealth creation. Natural resource development, however, must be consistent with an aligned to the protection of our environment,” the President said.

“Guyana’s biodiversity forms part of our natural capital. Our country is the habitat to some of the world’s most unique and rarest flora and fauna. Its biodiversity includes more than 467 species of fish, 130 species of amphibians, 179 species of reptiles, 814 species of birds, 225 species of mammals, and thousands of plants,” he said.

President Granger reminded that Guyana is at the centre of the Guiana Shield which encompasses an area of over 2.7 million km² – making it larger than Greenland – and which incorporates part of Brazil, Venezuela and Colombia and all of Guyana, French Guiana and Suriname.

The Guiana Shield, he said, is one of the most biologically rich and diverse areas of the world which comprises pristine forests, largely uncontaminated aquatic ecosystems and other intact ecosystems and also contain 15 per cent of the world’s freshwater reserves.

“The Shield is the lungs of the earth.  Its forests provide storage for carbon and mitigate the effects of greenhouse gas emissions. The Shield reminds us that natural resources are not confined to the extractive industries. Natural resources also include renewable resources such as our forests and their biodiversity,” he said.

The Head of State reiterated that Guyana’s natural resources are the patrimony of all Guyanese. “They are and will continue to be used for the benefit of present and future generations,” he said while noting that sustainable development is the key to protecting the country’s forests and minerals from exhaustion and from desertification and degradation, waterways from drought and our biodiversity from extinction.

“Guyana’s natural resources must be conserved, protected and sustainably developed so that they can benefit both present and future Guyanese,” President Granger asserted.