Construction of the long-awaited multipurpose centre on the northern side of the National Gymnasium, located on Mandela Avenue, commenced on Wednesday. The versatile court will allow for several disciplines including lawn tennis, futsal, basketball, and volleyball. 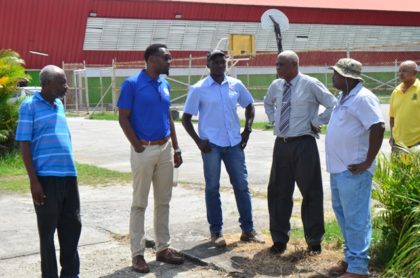 Director of Sport Christopher Jones (second from right) in discussion with the contractors on the site at the National Gymnasium where the Multipurpose court will be constructed.

The contract for construction of the quad was awarded to two contractors. Randolph Taylor Construction Company will construct the lawn tennis court which is expected to be 120ft long and 60ft wide, at a cost of $12.9M.

Simcon Engineering Company will construct the court which will facilitate futsal, basketball, and volleyball at a cost of $11.6M. This court is expected to be 115ft long and 72ft wide, along with two bleachers 30ft in length and 6ft in width. Both contractors are slated to complete construction within three months.

Director of Sport, Christopher Jones, speaking to the Department of Public Information (DPI), said that the construction of the multipurpose court is part of a plan to remodel the National Gymnasium. It was one of the major projects for the development of sports, accounted for in the 2017 National Budget.

The multipurpose courts will also facilitate athletes who want to practice their discipline at nights, as the Gymnasium is already outfitted with lights.

Additionally, there will be a designated area created for the senior citizens to practice recreational activities and a WIFI friendly environment for the youths. 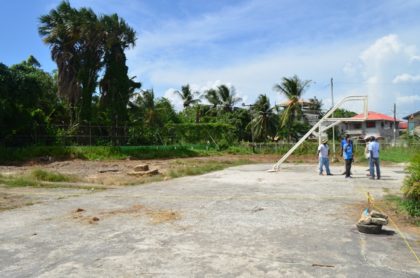 The location where the Multipurpose court will be constructed.