May 20, 2017
GINA, GUYANA, Saturday, May 20, 2017
The Hinterland scholarship students in the near future be housed in a new dormitory at Liliendaal.
Today, a contract to construct the dormitory, which will accommodate 120 students, was signed  by the Permanent Secretary of the Ministry of Indigenous Peoples’ Affairs, Alfred King and Chief Executive Officer (CEO) of  BK Construction Company, Brian Tiwari. 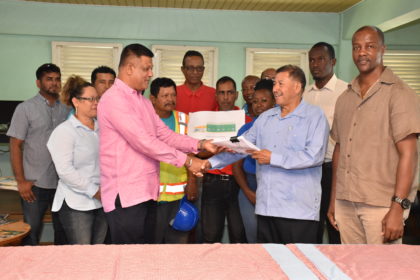 The signing ceremony, for the contract worth in excess of $186 M was held at the dormitory’s building site,Liliendaal, East Coast Demerara. The current building is overcrowded.

In brief remarks,  Minister of Indigenous Peoples’ Affairs, Sydney Allicock, who is performing the duties of Prime Minister, is  hopeful for a timely completion of the students’ dormitory which has a timeline of six months.
The Minister stated, “As you know, we are sitting in this building here that is overcrowded and the government has promised that it will enhance education facilities for education opportunities and through our Ministry, is one part of the bigger picture.”
He added that he was happy to see the beginning of the project, especially since it would benefit young Indigenous students in their quest for a higher education.
According to Minister Allicock, building an educated nation remains a high priority for the coalition government and as a result, efforts will continue to ensure that hinterland youths receive a well-rounded education. He added that he will be in contact with the contractors to keep abreast with the construction of the dormitory.
Tiwari expressed his gratitude for being provided the opportunity to work with the Ministry of Indigenous Peoples’ 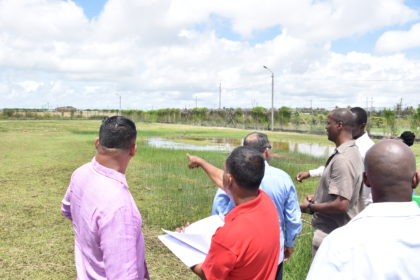 Affairs. He assured the Minister that his company will provide quality service, especially since it is for the students’ benefit.

Tiwari also committed to work assiduously to ensure that the dormitory is completed within the agreed  timeline, even if his workers have to work extra hours “especially during this May-June rainfall season.”
Over the past 10 years, an estimated 600 students have benefited from hinterland scholarships to attend a number of tertiary institutions, including the Guyana Technical Institute (GTI), Carnegie School of Home Economics, the
Guyana School of Agriculture (GSA) and the Guyana Industrial Technical Center (GITC).
Previously students were accommodated at guardians, family members and at the Amerindian Hostel.
By: Neola Damon

The plans designed for the student dormitory

The plans designed for the student dormitory