The Guyana Elections Commission (GECOM) was able to complete an overall 108 ballot boxes by the end of day three of the national recount of the March 02, 2020, General and Regional Elections.

Public Relations Officer (PRO) of GECOM, Yolanda Ward reported this evening that at the end of today’s session, 43 boxes were completed; 10 for Regions 1 and 2 respectively, 11 for Region 3 and 12 for Region 4.

On the first day of the recount, 25 boxes were completed, which was followed by 40 on day two. A total of 2,339 ballot boxes are to be counted. 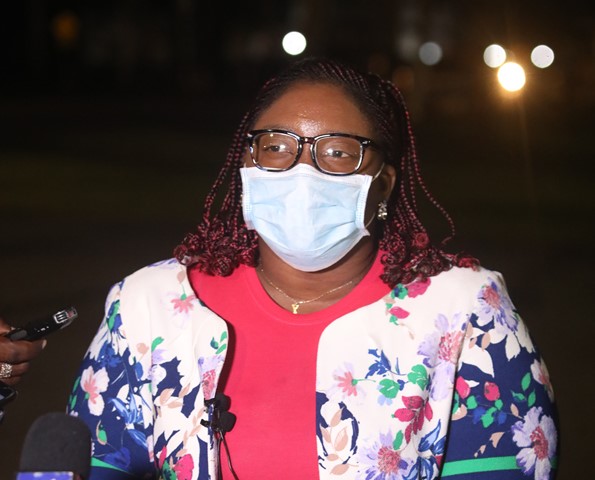 Public Relations Officer GECOM, Yolanda Ward providing an update to the media at the end of day three of the national recount

Ward also disclosed that at the end of the tabulation exercise of the Statements of Recount (SOR’s) today, 74 boxes were processed out of the 108 for the General Elections and 63 boxes for the Regional Elections.

She spoke of issues raised regarding the time the tabulation process began and the need to do daily tabulations that correlates with the counts.

“I think one of the concerns expressed is that the state of the current political environment. Persons are anxious and in particular where the tabulation is concerned people want to keep abreast with those numbers,” Ward said.

She said that the commission noted the concern and, in its deliberations earlier today determined that they will consider a request for that process to begin an hour earlier. The tabulation process currently starts at 05:00 pm.

Another issue that was brought to the commission’s attention was the matter of numbers of ballots boxes not matching the Official List of Electors (OLE).

Ward explained that the commission has been noting all of these issues in their observation reports.

However, specifically, as it relates ballots versus the crossed off list, Ward said she is not aware of any decision by the commission on that particular issue.

Earlier today it was discovered that there was a missing list from a box. The PRO confirmed that the box came from Region 3 and was returned to the container pending a decision by the commission.

She said that as the process continues, GECOM recognises that several issues have arisen based on objections from the parties. Ward reminded that the commission had approved a workplan and following that work plan, an order was gazetted.

“While we have a number of these issues arising, the commission is taking every step necessary to ensure that they are resolved to the satisfaction of all. We have to be cognisant that there is a process that it entails based on this gazetted order.”