DELHI, INDIA – Prime Minister Moses Nagamootoo was given a spirited welcome on, Thursday October 6, afternoon by lawyers and judges at the Indian Law Institute in Delhi.

Members of the eminent gathering celebrated the appointment of the Guyanese Prime Minister following elections in May, 2015. They also welcomed newly-accredited Guyana’s High Commission to India, Dr. David Pollard.

At the time, the Prime Minister was Chief Guest at a Panel Discussion on the Enforcement of Environmental Laws, which was hosted by the Delhi Tamil Advocates Association. 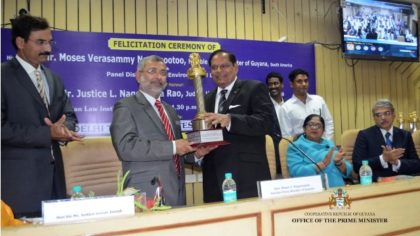 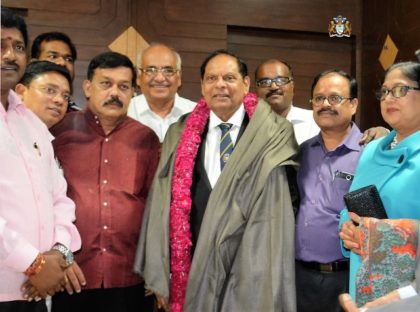 Prime Minister Nagamootoo explained to the packed hall of lawyers and judicial officials Guyana’s constitutional provisions on the environment and penalties provided under the Environmental Protection Act against violators. Noting that the principle, “polluters pay”, was reinforced by a known Indian Supreme Court ruling, Prime Minister called for both judicial courage and political will by governments to ensure that health and environmental safety measures are respected and observed.

Several of the speakers noted with interest Guyana’s policy on a Green Economy, and listened with rapt attention to explanations by the Prime Minister regarding protected area systems and eco-conservation parks in Guyana.