The Government of Guyana, through the Civil Defence Commission (CDC), continues to render relief and recovery efforts to communities affected by the recent spring tides.

The CDC met with key stakeholders on Thursday, to discuss disaster recovery in the Mahaica-Berbice area (Region 5), which was impacted by floodwaters.

Stakeholders at the meeting.

He also noted that short-and-medium-term solutions are being looked at to encourage communities to take appropriate actions to mitigate risks and reduce future impacts.

October explained that examples of these would include alternative ways for agricultural engagement. This, he said, included shade houses and raised planting boxes. The option of raised pens for ruminants was also explored.

The team was taken to several locations, which are known to be flood-prone during the rainy season, where they were given a comprehensive overview of the effectiveness of the structures. The small-scale farmers in these communities explained that with the use of the structures, their crops and livestock are no longer affected during floods.

In anticipation of more high tides expected next week, Captain October stated that several measures were implemented, which would ease the impact of the tides. He noted that the CDC will continue to carry out its awareness campaign and engage with residents in vulnerable communities to ensure maximum preparedness. 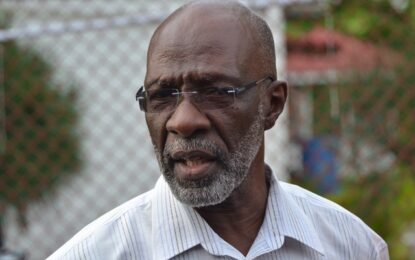 Recount Order should be set aside – Commissioner Alexander