The Ministry of Social Cohesion in collaboration with the Dochfour/Greenfield Harmony Group today, rewarded twenty-six students of Dochfour-Greenfield, East Bank Demerara, who excelled at academics and sports.

At the second annual bursary ceremony held at Punters Place, Ann’s Grove, 16 students received gift certificates and a plaque for excelling at the National Grade Six Assessment (NGSA). Maverick Hanover for attaining 500 marks and securing a place at the St. Joseph High School in Georgetown. He was followed by Shania Jordan who secured a spot at the same school with 498; and Jeneil Persaud and Yateshwari Nandan for attaining 491 marks each. The other awardees were awarded for attaining between 488 to 444 marks.

Also receiving awards was Rayon Doris who attained six subjects (Grade Ones) at Caribbean Advanced Proficiency Examination (CAPE), while in the area of sport, Osrick Pellew and Leeann Leyanna Charles were honoured. 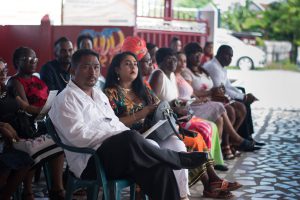 A section of those who attended the event 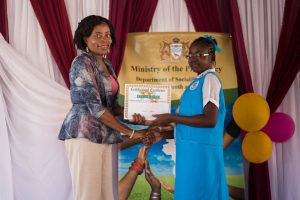 The Ministry of Social Cohesion, Coordinator, Sharon Patterson handed over the gift certificate to Shania Jordan

The Ministry’s, Coordinator, Sharon Patterson noted that the Dochfour/Greenfield Harmony Group was the first group that approached the ministry requesting training for its members in diversity education. That training was intended to train persons at the community level to understand the country’s multiplicity.

It was out of this engagement, Patterson explained that the group partnered with the ministry to award those students within the communities, who would have excelled at national examinations.

Patterson applauded the group for initiating such an activity that will serve as an encouragement to the students. She commended the teachers and students for their hard work and dedication.

District Education Officer, Shemlyn Baston-Andrews noted that the efforts by the ministry and the harmony group are a clear indication that they have embraced quality education which is a powerful tool which can be used to transform society.

In moving forward, Baston-Andrews told the students to continue to dedicate themselves towards achieving their goals.