Come March 2 this year, Guyanese must use their votes to continue the transformation across the country.

This is according to Director-General (DG) of the Ministry of the Presidency Joseph Harmon, who addressed hundreds Sunday afternoon at a public meeting on the Pouderoyen tarmac, West Coast Demerara. 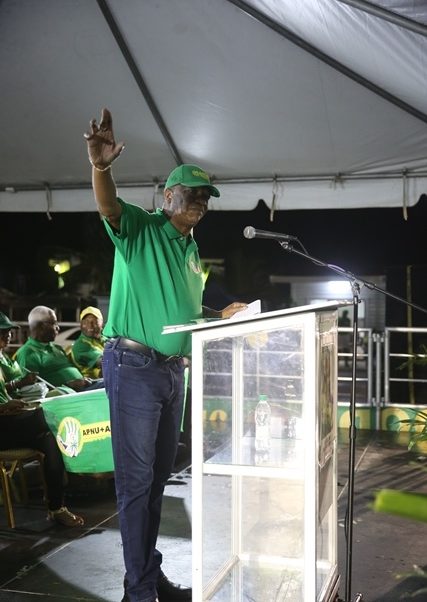 The coalition’s trademark “don’t stop the progress!” has become a popular chant as the party moves towards General and Regional Elections on March 2. Director-General Harmon used the slogan, even as he urged attendees to make their way to polls.

According to DG Harmon, the list of electors for the 2015 elections recorded 3,559 eligible voters in Pouderoyen. However, only 1,227 turned out to vote. Of that amount, 508 voted for the coalition.

“We have to mobilise, we have to get out and vote. Don’t stop the progress. A real victory comes when our people turn out to vote no matter where you are. We have to understand what is at stake,” he proclaimed.

The Director-General encouraged residents to use this period during which the Revised List of Electors (RLE) has been made public by the Guyana Elections Commission (GECOM) to ensure that they are on the correct list.

“We are moving forward together, don’t stop the progress!”

Speaking at the meeting too was Region Three resident Maureen Whitaker who said from 2015 to date the region has seen tremendous development under the demonstration.  According to Whitaker, local democracy was restored. Added to that, she said scores of young people were gainfully employed through various programmes offered by the administration.

She was joined by Neilson Mckenzie who also asked residents not to forget the past. He noted that 2015 ushered in a new day for Guyana and likewise, March 2, 2020, will also be a defining moment in the lives of all Guyanese.