– step forward in the right direction

Minister of Public Security, Khemraj Ramjattan stated there is a dire need to address non-violent drug offenders in a court operated rehabilitation programme.

“In our national drug master plan for 2016-2020 there is the policy that states we have to reduce the use of incarceration which is a punitive response for non-violent drug offenders,” Minster Ramjattan said.

According to Public Security Minister, “we wanted through that policy to provide treatment and rehabilitation and so the establishment of a drug treatment court was identified as one such programme.” 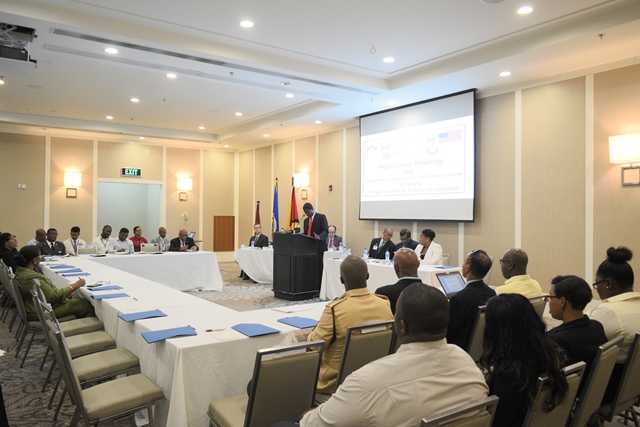 Participants at the High-Level Meeting on Exploring Alternatives.

Minister Ramjattan was at the time delivering remarks at the high-level meeting on exploring alternatives to incarceration including drug treatment courts in Guyana.

Minister Ramjattan noted that the programme will yield many benefits. “I can also see that with treatment, recidivism will fall and not only with drug offences but with other offences because drug users support their bad habits just for the want of getting more money so they can buy some more drugs.”

He noted that the initiative will be cost effective in the long run and forms part of the transformation needed in Guyana’s justice system.

Also delivering remarks, was National Anti-Narcotics Agency Head Major General (Ret’d) Michael Atherly who remarked that “drug addiction is a chronic relapsing disease that must be dealt with as an essential element of public health policy.”  He reiterated the Public Security Minister’s sentiments noting that the strategy calls for the exploration of offering treatment, rehabilitation and recovery support services to drug dependent offenders.

“Today represents an important step forward,” Atherly said and encouraged stakeholders to continue supporting the cause.

The initiative is a commitment made by the Executive Secretariat of the Inter-American Drug Abuse Control Commission (ES/CICAD) and Secretariat for Multidimensional Security of the Organisation of American States (OAS). The commitment embodies the goal of providing technical assistance to OAS member states in the implementation of alternatives to incarceration programmes.