“Eat what you grow, grow what you Eat conserve foreign exchange – Jervis

Delivering brief remarks to declare the event open, Permanent Secretary of the Ministry, George Jervis encouraged stakeholders to conserve on foreign exchange by utilising locally grown and produced commodities in the daily preparation of meals. 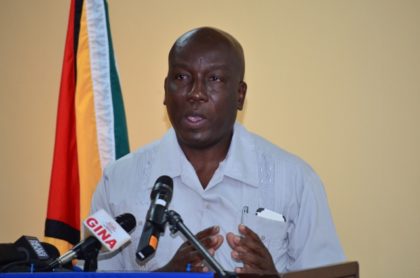 “The main purpose is to have predominantly Guyanese grown products prepared, tasted judged and eaten we expect coming out of this the staff members and others who are invitees will be able to utilize these ideas that they will have today in their own cooking and always let us maintain eat what you grow ; grow what you eat. I hope you have the ideas so that you can incorporate them into your cooking and you can avoid putting your money into the pockets especially of suppliers out of the Caribbean,” Jervis said.

Further, Jervis said the competition between agencies and departments of the Ministry of Agriculture presented and opportunity to showcase the various meals which can be produced from locally grown food and will be extended to the public come 2017.

“We have sufficient stuff displayed here that if you were to try a different recipe every day you should be able to make 365 days of course , in fact what we will do next year is have it open to all those who feel they are up to the standard. We have some of the best cooks in Guyana. I am inviting the public to join us in 2017 and be part of this competition,” the Permanent Secretary noted.

Likewise, representative of the United Nations Food and Agriculture Organisation (FAO), Reuben Robertson said the event was evidence enough that the Ministry of Agriculture has what it takes to encourage and the use of home grown commodities in the preparation of meals.

“From what I have seen here today it is a clear indication that we have what it takes within the Ministry of Agriculture through the various arms to take the leadership role in helping to promote the various uses of these commodities so that we can have the local population eating more of what we produce. We need to recognize this as an important challenge and move it beyond this to one of helping to promote what the Ministry of Agriculture programmes are all about in terms of Agricultural diversity.”

In addition the FAO representative said that the competition presented the opportunities for employees of the various agricultural agencies to develop a sense of camaraderie which has the potential to lift productivity levels across the sector.

“For a lot of time we have our own agencies working in silos and we do not have that cross fertilization between the various organisations which represent the same ministry and having a competition like this every year tends to stimulate that partnership and we hope that we can build on that.,” Robertson told those gathered for the festival like event.

Robertson also took note of the large number of youths employed by the various departments of the Ministry of Agriculture and encouraged that they be nurtured and information exchanged among the different stakeholders to lift the profile of the organisation.

The competition was won by the National Agricultural Research and Extension Institute (NAREI) with its display of several meals made from the breadfruit under the theme “Breadfruit, the new wonder food.”