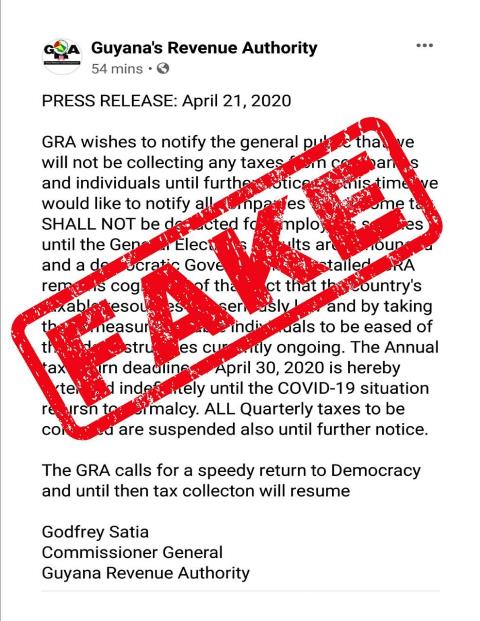 Georgetown, GRA, April 22, 2020: The Commissioner-General has refuted in no uncertain terms a “fake press release” being bandied about on the worldwide web, and purportedly emanating from the Guyana Revenue Authority (GRA) advising the general public that tax collection is suspended until further notice.

This fake release (fake news) is being spread by certain elements of society hell-bent on tarnishing the reputation of the Commissioner-General and the hardworking staff of the Guyana Revenue Authority.

The Authority wishes to draw the public’s attention to the various press releases in the national press, television and radio which advises that tax collection continues, and the various extensions granted.

The Commissioner-General further advises that the Authority serves the people of Guyana and that he would not allow detractors and unscrupulous persons to draw the Authority into any political discourse.

The general public should therefore be reminded of the official platforms and communication channels of the GRA:

Official, verifiable information can also be found on the Ministry of Finance’s website finance.gov.gy.