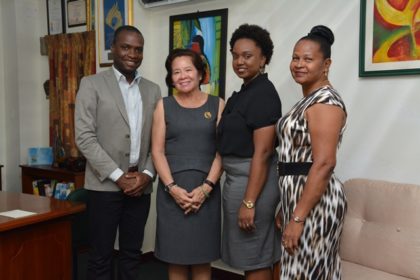 The Municipality decided to consult with the First Lady on these matters since her office has been doing extensive work throughout the country, which is focused on women’s empowerment and youth employment.

Mayor Marshall said that systems have to be put in place to protect and mentor the young people of the region; hence collaboration with the First Lady’s office and other agencies and Government Ministries would place the Municipality in a better position to effectively address problems of abuse and exploitation of women in the Town and its environs.

“As Mayor, I must say, my heart aches when I see what is going on with our young people… We believe that we were given an assignment, not only to lead or make Bartica a model town in terms of the ‘green’ economy, but we also need to have model young people that we are proud of and of course young people that will go forth and become future leaders,” the Mayor said.

Mrs. Granger explained that her office currently runs on a small budget. However, she suggested that they tap into a 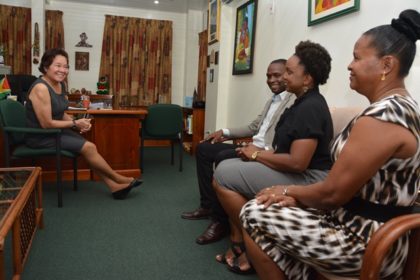 number of ongoing programmes such as the Comprehensive Empowerment Programme for Teen Mothers, which, among others, educates teen girls on the need for healthy lifestyles, provides counselling for those suffering from low self-esteem and other emotional problems, encourages them to learn a particular skill and empowers them to become leaders for change in their respective communities.

“We also spoke about ICT [Information and Communications Technology] workshops and how these can tie into what the Bartica group has in mind and how we also incorporate [them] into those workshops that are coordinated by my office,” the First Lady said.

Meanwhile, Councillor Williams said in recognition of the high school drop-out rate of males in Bartica, the Municipality has plans to implement an ICT programme, provide evening classes and support to those youths, who left the school system early.

In this regard, Mrs. Granger noted that the Self Reliance and Success in Business Programme will soon embark on a training or trainers workshop, where persons from the various regions would be trained so that they can return to their various communities and teach the young people the necessary skills to start their own businesses.