Georgetown, Guyana – (November 1, 2017) First Lady, Mrs. Sandra Granger, this morning, met with Mayor of Linden, Mr. Carwyn Holland to discuss potential areas of collaboration. The meeting, which was held at the Office of the First Lady at State House, focused mainly on improving youth literacy. 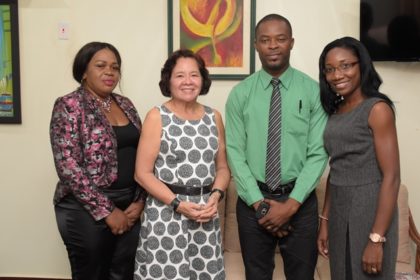 Mayor Holland, who was accompanied his wife, Mrs. Nikosa Holland, and Linden Regional Education Officer (REDO), Ms. Marcia Paddy-Andrews said that they came to the First Lady after hearing of the success of her Youth Development Initiative, a literacy and numeracy programme that targets underperforming primary school students. “We had to meet with the First Lady… to get her support for the youth development initiative, which is a project [that]… got great success in Buxton and Lusignan area… We’re interested in having that programme in Linden because we see the need to put some focus on our youth development and our children and our education sector,” the Mayor said.

The REDO, Mrs. Paddy-Andrews noted the importance of focusing on parent involvement in their child’s education. “Parent education is very important in this instance because there must be a follow-up and follow-through when the children go home… A lot of the children are not reading at home because the parents themselves lack [reading ability],” she said.

The First Lady cited that a lot of the problems stem from issues in the child’s household. “Our experience with the Buxton and Lusignan youth initiatives is that sometimes [they] don’t even have an adult in the home… Plus you have children, who are hungry, she said. Mrs. Granger also encouraged the Linden team to get parents involved with the programme. “From the inception we ask the parents if they would like the child to participate… The parents buy into it first and then we use teachers in the system to deliver,” she said. 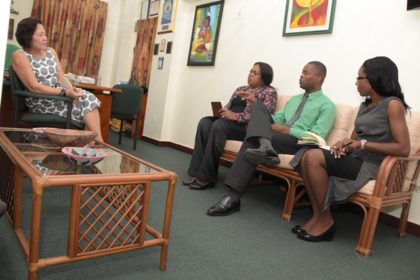 Making reference to the financial intricacies of starting a similar initiative in Linden, the First Lady mentioned budget challenges, but encouraged the Linden team to seek additional funding locally and internationally. Mrs. Granger also advised the team to conduct a pilot of the programme and to use feedback to write a proposal with a detailed financial outline to make further connections for meals, teaching aides, and other financial costs.

After an informative discussion with the First Lady, Mayor Holland indicated that he will conduct the pilot programme in December. “We’re looking to launch that [programme] in December… [with] a pilot project targeting grades five and six under direction of the Ministry of Education. So, together with the Ministry [of Education], [local youth group,] the Linden Youth Leaders, the Mayor’s Office, my wife, and the Office of the First Lady, we’ll be looking to get that going,” he said.

The Linden team also discussed with the First Lady the success of their local youth group and senior care programmes, as well as their plans to boost tourism in Linden.