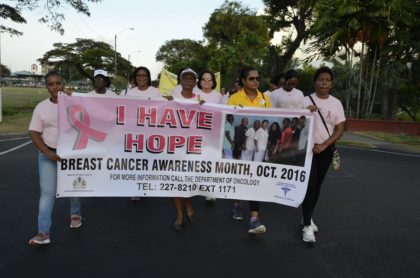 Scores of persons assembled, this morning, at Parade Ground, Georgetown, joined by First Lady, Mrs. Sandra Granger in the Breast Cancer Awareness Walk, which was organised by the Ministry of Public Health to raise awareness about the importance of early detection in the treatment of breast cancer.

The First Lady was joined by Minister Public Telecommunications and Member of Parliament, Mrs. Catherine Hughes, Dr. Latoya Gooding, nurses and other representatives of the Oncology Department of the Georgetown Public Hospital Corporation (GPHC), representatives of the Ministry of Social Protection, the Cancer Institute of Guyana, the Periwinkle Club, the Giving Hope Foundation, the Guyana Responsible Parenthood Association (GRPA), the Demerara Harbour Bridge Corporation, cancer survivors and their relatives and friends, all marching under the theme ‘I have hope!’. 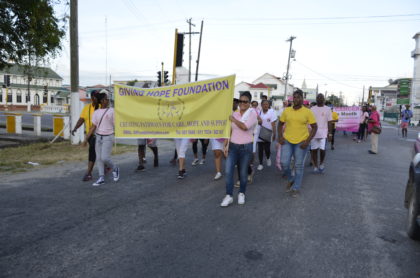 The walk commenced from Parade Ground, proceeded east along Middle Street, south into Waterloo Street, east into Church Street, north into Irving Street, west into Lamaha Street, south into Camp Street then headed west into Middle Street to culminate at the starting point. Along the way, marchers paused at Merriman’s Mall on Church Street and at the cancer treatment ward of the GPHC on Lamaha Street to spread the message that “early detection saves lives”. They also waved at several cancer patients warded at the hospital who looked out their windows in response to their chant.

Today’s walk is one of several activities the First Lady has thrown her support behind to observe Breast Cancer Awareness Month 2016. 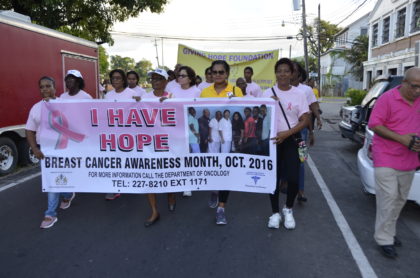 First Lady, Mrs. Sandra Granger and representatives of other groups march through the city streets, this morning, to raise awareness about breast cancer 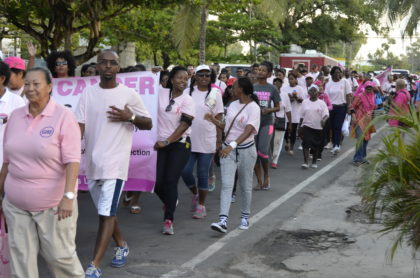 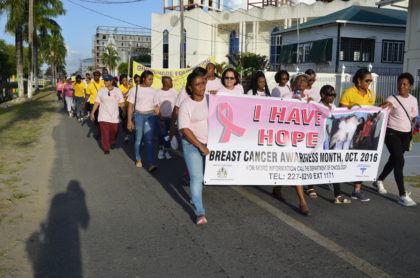