Framework for Region Nine PARD to be completed by June

The Region Nine, Regional Democratic Council (RDC) has started the ball rolling on the plan of action for the Upper Takutu-Upper Essequibo region’s development.

The RDC has charted a roadmap for the formulation of the 10-year plan and is partnering with Conservation International Guyana (C.I. Guyana). 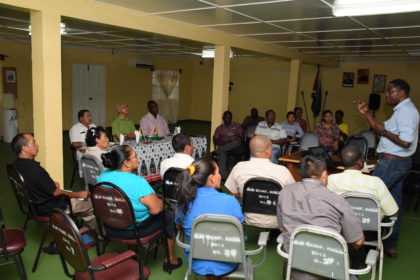 C.I. Guyana’s, Technical Coordinator for the Livelihood Programme in Region Nine, Rene Edwards explaining the blue print for the planned development at a recent meeting in Lethem

The blue print for the planned development was outlined by C.I. Guyana’s, Technical Coordinator for theLivelihood Programme in Region Nine, Rene Edwards, at a recent meeting in the RDC building in Lethem. In attendance were Minister of Communities Ronald Bulkan and Permanent Secretary of the Ministry, (PS) Emil McGarrell.

Edwards explained that C.I. Guyana has been guiding the region with a view of having a framework for the plan completed by June.

“By May, we are going to start finalising the priority areas for action, so that by the end of June, we would have something that the region can use to inform their deliberation and planning for the 2018 budget,” Edwards said.

“We recognise that between now and June we would not have a fully fleshed-out plan of action for the region’s development because of limitations of time and resources, but we will have a framework that would be based on consultations that would then feed into the budget process,” he explained.

Since initiating the process of the plan’s formulation, the region has worked with CI Guyana to conduct a three-day capacity building workshop with the councillors. Edwards highlighted that the training focused on the process of facilitating community discussions, as well as. The training also focused on understanding the opportunities, the challenges, the strengths and weaknesses of communities, Edwards explained.

With support from C.I. Guyana, the region has since successfully executed engagements with key stakeholders in Lethem and public consultations with eight communities in the Karasabai sub-district.

Edwards pointed out that the decision to begin the public consultation in the Karasabai sub-district was due to the fact that the communities within were never part of any formal planning process.

Edwards explained that an analysis, was done and the findings revealed that several of the other Region Nine communities’ inputs were taken on board on the crafting of a number of community plans  which have been floating around the region.

Community groups’ plans for development such as the North Rupununi Development Board (NRDB), the South District Council, the Kanuku Mountains Representative Group, have all been crafted with input from their stakeholders.

Edwards explained that in going forward, and in engaging these groups and communities, these already established plans will be fed into the plan of action for the region’s development.

He said that between now and June, the region with support from CI Guyana will continue the public consultations for the planned development. The setting-up of a Planning Unit and a Steering Committee for the plan of action for the region is also to be prioritised within the time frame, Edwards said.

On July 10, 2015, on the occasion of the swearing-in of newly elected chairpersons and their deputies, President David Granger charged each council to craft a Plan of Action for Regional Development (PARD) for their respective regions.

The Region Nine RDC initiated their process in December 2016. The region approached, CI Guyana to act as a facilitator of the process, by providing technical and financial support towards moving the process forward.

The PARD is a new initiative which is expected to assist the 10 RDCs in developing, implementing, monitoring and assessing appropriate action-oriented plans for the social and economic advancement of their respective regions.

The regional development planning approach will result in better operational plans and a budget which the region would use to implement programmes and activities.