From one old laptop to ‘Two Brothers Technology Centre’

Two years ago, Bernie Robertson and his brother Joel started a small printing business with just an old laptop and printer perched on a bucket in a corner in their Annai, Region Nine home. The youngsters had just completed training under Cohort One of the Hinterland Employment and Youth Service (HEYS) programme.

Today, the Robertson brothers are the proud owners of ‘Two Brothers Technology Centre,’ the first of its kind in the North Rupununi. They provide services including typing and printing, scanning, downloading and uploading, video and photo editing and other ICT services.

On Friday, the centre was officially declared open with the enrollment of the first batch of students to be trained in Information Communication Technology (ICT). Minister of Indigenous Peoples’ Affairs, Sydney Allicock and HEYS Coordinator, Junior Williams witnessed the launch.

Co-founder Bernie Robertson explained that the business commenced one week after the completion of the first cohort of the HEYS training programme.

Determined to expand their business, the brothers with help from Councillor Mike Williams approached the Small Business Bureau (SBB) for a grant of $300,000 and were successful. They then expanded the venture with two laptops and one printer.

“As we started to develop and implement our ideas by creating new business activities, we were approached by many teachers, friends, families and students to develop a programme for information technology classes. Since this was missing in our community and in some other hinterland communities of Guyana…many residents do not have access to these services and so we developed the programme,” Bernie said.

After careful planning, the young men were able to apply for additional funding from the Institute of Private Enterprise Development (IPED), and now have ten computers that are powered by solar energy. They have also begun the construction of a building to house the business.

“We were determined because after being trained in ICT under HEYS we always wanted to become more involved in this field … so, with this additional funding in hand we decided to commence the information technology classes for six months, three times per week, three hours per day at a very reasonable cost of $5000 per month,” Bernie further explained. 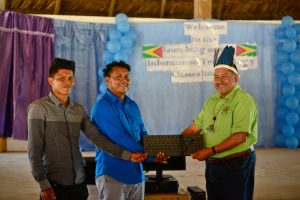 Minister of Indigenous Peoples’ Affairs, Sydney Allicock handing over the computer and printer to the two brothers Bernie Robertson and Ali Joel 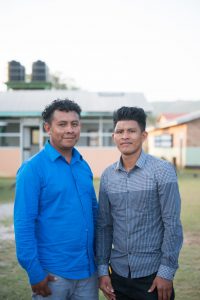 The two brothers Ali and Bernie 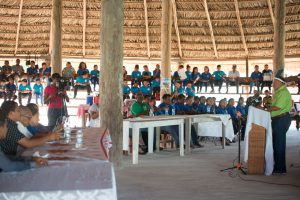 Minister of Indigenous Peoples’ Affairs, Sydney Allicock addressing those gathered at the launch 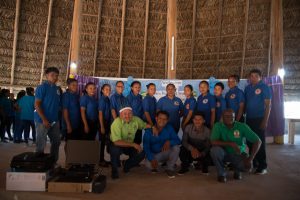 The classes will commence on Tuesday 19, February 2019 and will be held in the Village Community Centre building for the first month.

Not only were the Robertson brothers able to meet a need within their village, but they also helped in reducing travel costs for many families who often had to journey more than two hours to Lethem to access the services which they now provide. Bernie Roberson added, “We have seen many students and teachers struggle in getting technology services to their reach especially during CSEC term and before Grade Nine exams. But all that of that is changing and Two Brothers Centre is playing a big part in this transformation.”

Robertson expressed appreciation to the government for implementing such a significant initiative for hinterland youths which he said served as a foundation for his dream of becoming an entrepreneur.

For the future, Robertson said that they will be working along with other agencies to be accredited and will introduce farmers to the internet in order to explore new technologies to improve their productivity.

In his remarks, Minister Sydney Allicock said that the Coalition Government is committed to ensuring that education and training opportunities reach citizens across Guyana, regardless of their location and the launch of the tech-centre is just one of the outcomes of that commitment.

“We are obligated to bring education to you. That is why we initiated these training opportunities. We need computer technicians, teachers and engineers… failing to prepare is preparing to fail and what this group has done is to prepare themselves and I’m very proud and happy that this young group has taken the initiatives because technology is what is needed today to move forward.”

Minister Allicock also handed over an additional desktop computer and printer to the brothers. This will add to the 10 computers already secured.

HEYS Coordinator, Junior Williams said that the programme has touched the lives of youths in 220 communities in all the 10 Administrative Regions, and thus far, 2,000 businesses have been established.

The HEYS initiative, which was launched in 2015, is designed to give youths a second opportunity to empower themselves through entrepreneurship. The programme targeted some 4,000 youths in the hinterland.