Following the massive fire which destroyed most of the Georgetown Prison this afternoon all systems were activated to respond to the situation. Five prisoners escaped and two were shot and captured. One prison officer was shot and killed. Three prisoners are on the run, they include Bartica and Lusignan massacre convict Mark ‘Royden’ Durant aka Royden Williams, Uree Varswyck aka Malcolm Gordon and one other who has not been identified.

Here is what they had to say:

“Well the government is acting quickly to ensure that the prisoners are caught but more important that those prisoners who were previously accommodated at the Georgetown prison are kept in a secure place and this is our task overnight on this Sunday night and by Monday morning will be in secure accommodation so Guyanese will be assured that there are not going to be prisoners roaming all about the city or the countryside.”

“We regret the loss of life and I would like at this point in time extend sympathy to the family of the prison officer who is confirmed dead and obviously we are concerned about the loss of life and we are trying to get information from within the prison to see if any other persons were killed or other persons were injured, so from a human point of view we are anxious that the prisoners, even though some of them might have be responsible for the breakout, they are safe from injury and they are kept in a situation overnight at which they can be no menace to society.”

“We are in the process of providing the necessary things to make them (the prisoners) comfortable and make arrangement for them to be placed in other prisons around Georgetown. We are getting some tents and extra lighting in Lusignan, it’s a closed off area.”

“A lot of them for possession for narcotics and they have served some time. There is an early and a late release date, but if you have good behaviour you can have remissions from me…. We have to ask the Chancellor to start the process of going to prisons to do situational analysts to see how many remands are there and if their (prisoners) families can pay their bails.”

“There is a large deployment from the security forces there to make sure that residents are not interfering with the movement of these prisoners to that location and to the other locations where they are going to.”

“The incident started in the Strong Cell Division and the Wooden Prison (Condemned Division… the Fire Service was there but the fire quickly spread to other buildings, with the assistance of other agencies, we immediately activated the Evacuation Procedure whereby the brought prisoners to a safe area outside, all of the prisoners that they have access to and that were readily available.”

“1018 souls to account for what is your priority one is to ensure that the fire does not jump outside the walls of the prisons and secondly ensure that everybody exits the prison safely… In less than an hour more than six buildings were engulfed, very large buildings in the centre of Georgetown. This will be a process that we have to go through what went wrong and look how recover and what mechanisms are necessary”

Chief of Staff (acting) of the Guyana Defence Force:

“There are certain protocols that are activated once there is a situation like that… the Fire Service normally they are the first to respond, and then the police get in and we get in and provide the outer cordon. Today it was very difficult because of the raging fire, but as the prisoners were move to the Lusignan prison, we also deployed troops there. We also have air assets available and that provide a lot of reconnaissance and other services. 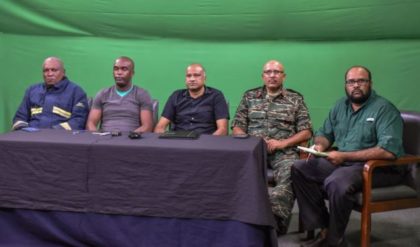 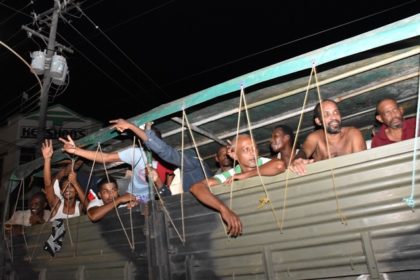 Prisoners being removed from the Georgetown Prison 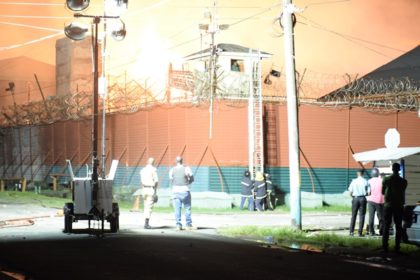