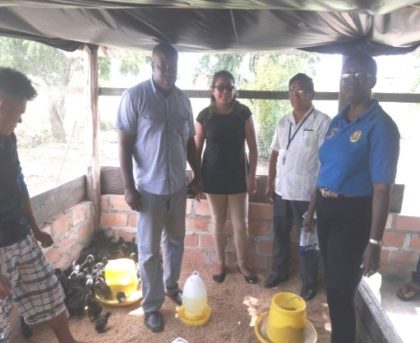 Handing over of chickens to the school

The Tempo breed is fairly new to Guyana, after first being introduced in 2016 by the National Swine Producers’ Association and the Ministry of Communities. These institutions were given technical support by GLDA to ensure best practices were adopted and the animals were properly cared for.

Chief Executive Officer of GLDA Mr, Nigel Cumberbatch indicated that these animals were selected based on their favourable characteristic.

“I would like to point out that some favourable characteristics of the Tempo breed are fast growth rate, high litter sizes and its ability to withstand our climatic conditions. Additionally, Tempo offspring are strong and robust pigs from birth to market. They have a high total feed efficiency through low mortality and efficient feed use.” Cumberbatch said.

As the year progresses, GLDA plans to ensure artificial insemination (AI) services by utilizing semen from the imported animals. They are being made available in the five coastal regions and Region 10.

In addition to general livestock and small ruminant care training, extension officers will be training farmers in proper animal husbandry. 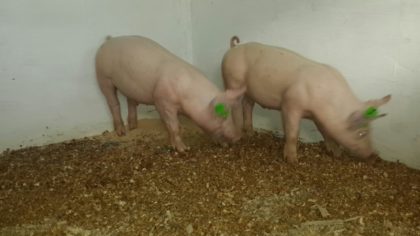 As part of its Hinterland Development Programme, the authority in February last handed over 105 Black Giant chickens to Bina Hill Institute in Annai, North Rupununi, Region 9. The agency also donated the necessary start-up feed and vitamins to the institute. This is the second residential institution to benefit from such initiative with Mahdia Secondary being the first.

The objective of the initiative is to give developmental aid to hinterland residents. The birds will be reared primarily for the production of eggs and, to a lesser extent, meat to boost the nutrition of the students housed in the dormitory. The project is one of the many initiatives being rolled out by government to reducing the cost attached to feeding students, while encouraging entrepreneurship among youths by providing them with business opportunity after leaving school.