Georgetown, Guyana – (December 22, 2017) Commissioner of the Guyana Lands and Surveys Commission (GL&SC), Mr. Trevor Benn, yesterday, announced that plans are in train to set up a National Co-ordinating Committee (NCC) for the hosting of the 17th Session of the Committee for the Review of the Implementation of the Convention (CRIC 17) of the United Nations Convention to Combat Desertification (UNCCD) in January 2019. He also announced that steps are being taken to ensure transparency in the implementation of the four-year US$14.8M Sustainable Land Development and Management Project (SLDM), which is set to commence in January 2018. 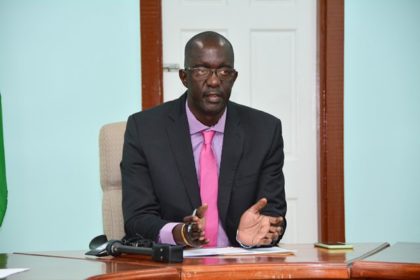 Commissioner of the Guyana Lands and Surveys Commission (GL&SC), Mr. Trevor Benn gestures as he makes a point, during a meeting at his Durban Backlands office today.

Speaking at a press briefing held in the Conference Room of the GL&SC Headquarters in Durban Backlands, Georgetown, Mr. Benn said that the hosting of the one-week CRIC meeting is a significant achievement for Guyana and as such, the NCC will include stakeholders from the Caribbean Community Secretariat, the Ministry of Foreign Affairs and other agencies to ensure its success. Representatives from all of the signatory countries to the UNCCD, which number over 415 from about 100 countries, are expected to attend the meeting, including those from the United States of America, Australia, the Philippines, Kenya and other African countries, Cuba, and countries from the English-speaking Caribbean.

“I think it is very significant for Guyana. It is the first time [that] any such event is going to take place in Guyana and in the Caribbean… All of the countries that are signatories to the Convention would have a seat around the table and so just the mere fact that a meeting of this nature, an international meeting comprising over 100 countries coming to Guyana, it’s significant and the fact that they’ve chosen Guyana… I think it is a signal of the confidence that they’ve placed in Guyana and the work that we have been doing to support the Convention over the years,” Mr. Benn said.

The Commissioner noted that while Guyana has been a signatory and an active participant to the UNCCD since 1997, this has been its most successful year. Guyana is the first English-speaking Caribbean country to have acceded to membership of the CRIC Bureau, which is a subsidiary body to the Conference of the Parties (COP) that is mandated to regularly review the implementation of the Convention. Also, at the last COP meeting, which was held in China in September 2017, Guyana, for the first time, was able to advance a capacity-building item to the Agenda, which was tabled after it won widespread support from countries including the United States, the European Union and several African countries. 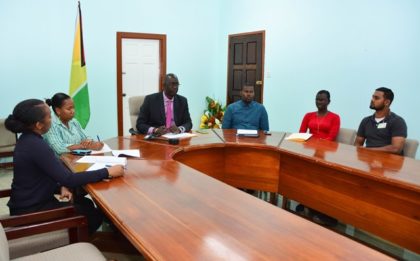 Mr. Benn said that this is a significant achievement as it often takes intense preparations and negotiations beforehand to advance items from a Regional perspective to the Agenda. “There was comprehensive discussion on the motion and there were certain changes made to the decision, but in the end, we managed to pilot it through and we got a lot of kudos form the UNCCD for the achievement, which is the first in the history of the Convention,” he said.

Meanwhile, the Commission is working on mainstreaming the SLDM Project, which is set to start with an official signing ceremony on January 18, 2018. The Project, which is financed under the Norway Agreement and through the Guyana REDD Plus Investment Fund (GRIF) aims to “establish an enabling environment for promoting sustainable and climate-resilient land development, management and reclamation in support of Guyana’s Low Carbon and Green State Development Strategies”. 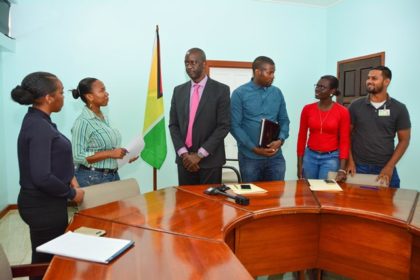 Commissioner of the Guyana Lands and Surveys Commission (GL&SC), Mr. Trevor Benn, third from left, interacts with one of his staff members at the close of the press conference.

Among its key deliverables, the Commission hopes to significantly boost its capacity to deliver its mandated functions under the GL&SC and State Lands Acts; to review legislation related to land administration as well as to create the optimal legal and policy framework for the sustainable management of lands.  “A number of things we want to do will have to run concurrently… It’s a very ambitious project, but we believe that here at Lands and Surveys, we have a competent bunch of young people… I’m confident that we can, in the same way that we have been making things happen here at the Commission, we can on the Project,” Mr. Benn said.

The Commissioner also said that overall, the Project aims to make productive use of degraded and deforested lands in Guyana and to reclaim mined out areas, particularly in Bartica, Cuyuni-Mazaruni (Region Seven) and in Upper Demerara-Berbice (Region 10), for development. Initially, it will be piloted in three regions in Guyana, which are exposed to high incidences of land degradation, including those areas that have been affected due to the development of new land schemes. A number of stakeholders are expected to benefit from this aspect of the Project, including the Guyana Forestry Commission, the National Agricultural Research Institute, the Private Sector Commission, the Guyana Women Miners Association, local government institutions and civil society groups.

The GL&SC is also advancing its work to develop a National Land Policy. While the GL&SC Board of Directors is taking the lead on the former, Mr. Benn said that the Commission is hoping to host wide-spread consultations in that regard so that at the end of the process the most appropriate policy for land use in Guyana is created.

In addition, he said that the Commission is intensifying its efforts to develop a National Policy on the Geospatial Information System (GIS). “[It is intended] to make sure that we keep in touch with the best practices, the international standards and to make sure that Guyana is not lagging in its responsibility to provide the most up-to-date geospatial product to the people,” he said.

Plans are also in train to undertake a comprehensive update of the maps of Guyana, which, in some cases, date back to the 50s and 60s. This process, which entails aerial mapping or satellite imagery, is costly, as such the Commission does not expect to be able to map the entire country under this Project. “Our intention is to restrict it to specific regions and before the Project was developed we had consultations with a number of stakeholders and we have identified a few regions that we are going to be prioritising, Region Four, of course, being the main region… We are hoping that this will be a stimulus for additional projects to come,” he said.