The Guyana/Suriname Cooperation Council meeting was reconvened today, in the boardroom of the Ministry of Foreign Affairs after being dormant for more than a decade.

The commitment to reconvene the Council was made during discussions between President David Granger and Surinamese President Dési Bouterse last December when the Surinamese head made a state visit to Guyana.

The reconstituted Council was charged by Minister of Foreign Affairs Carl Greenidge to deepen, widen and consolidate the bonds between the neighbouring countries.

“This Council must go beyond signing of agreements to ensuring good faith implementation of the agreed to activities,” Minister Greenidge charged the Council.

The Guyana/Suriname Cooperation Council was established to deepen and strengthen relations between Guyana and Suriname in areas of economic, health, technology, education, natural resources, and security and general socio economic realities.

This is the seventh meeting of the Council and it has an “impressive” and “wide ranging” agenda which will seek to capitalise on the “myriad opportunities for cooperation, for action,” Minister Greenidge pointed out.

“Both heads of state rely on you the esteemed members of the Council to create the conditions for and establish means by which those prospective advantages can be realised in the shortest possible time,” Minister Greenidge charged the Council.

While Guyana and Suriname continued cooperation in matters of mutual interest during the inactive years of the Council, Minister Greenidge noted there was a “reduction in the intensity and scope of cooperation and our efforts to cooperate.”

Head of the Surinamese delegation, Ambassador Dr John Kolader, said the Council provides a new beginning for the strengthening of 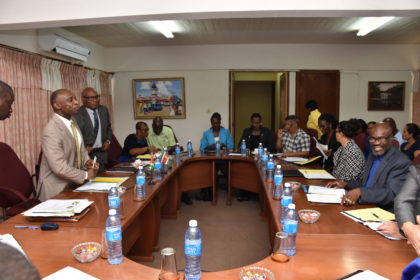 Some of the members of the Guyana-Suriname Cooperation Council

“I think that this body should not only monitor and see what the several agencies are doing but also to take initiatives and give guidance in the efforts for the cooperation,” Dr Kolader said in his opening remarks.

Dr Kolader, who also served as Suriname’s Ambassador to Guyana and is now the Chairman of the Border Commission said the Cooperation Council is a crucial instrument for “promoting and cementing the friendships between the two countries”.

Guyana and Suriname have similar historical and cultural backgrounds and possess similar natural resources, economic and cultural potentials. The Cooperation Council is considered the “epicentre” of efforts at deepening cooperation between the two countries.