As part of government’s efforts to bolster engagement with the diaspora, a conference for entrepreneurs from Canada, the United Kingdom and the United States is currently being held in Guyana from May 22 -25, 2017.

The collaborative project undertaken by the Ministry of Foreign Affairs and the International Organisation for Migration (IOM) is being held under the theme ‘Effective and Sustainable Diaspora Engagement for Development in the Caribbean (ESDEDC) Go See Visit 2017’. This event will see prospects being developed for small to medium-sized enterprises (SMEs), to create employment. 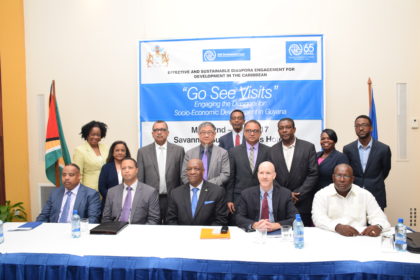 Members of the Head Table- From Left-, Entrepreneur Diaspora Representative, United States of America, Clifton Mc Donald; CEO for GO- Invest, Owen Verwey, Minister of State and Acting Minister of Foreign Affairs, Joseph Harmon, Regional Coordination Officer for the Caribbean and Chief of Mission in Guyana, Robert Natiello and Head, Diaspora Unit, Ministry of Foreign Affairs, Michael Brotherson along with the participants who will be participating in the ‘Go See Visit Project 2017’

Minister Harmon explained that the Go See Project will complement the initiative by the government in helping “to tap up and to tap into” the human and financial resources available with the diaspora. However, Minister Harmon noted that the project offers the government the opportunity to provide assistance through facilitating structures, and access to stakeholders, to help germinate business ideas that enterprising members of the diaspora may have to offer.

Minister Harmon highlighted that the participants have submitted their business proposals to explore possibilities in the areas of- Information Technology, agro- processing, financial services, tourism and customer services, renewable energy and health services.

“I have no doubt that this experience, the week will surely concretise the decisions that which you will make, you will venture whole heartily into the activities into which you want to engage in,” Minister Harmon said.

Chief Executive Officer for the Guyana Office for Investment (GO-Invest), Owen Verwey in his address to participants said, “This is an opportune time to invest in the country.”

Verwey highlighted that apart from the emerging Oil and Gas Sector there are other areas to invest in.

Verwey highlighted some the areas that investment opportunities are available in; these include- agriculture, renewable energy, agro- processing, tourism services, information technology, business outsourcing services, mining among others.

Regional Coordination Officer for the Caribbean and Chief of Mission in Guyana, Robert Natiello said that there is a growing recognition that transnational communities facilitate increased trade, investment and cultural linkages between countries. Natiello stated that the resources that flow in the communities across borders are varied and range from skills, knowledge, ideas to cultural capital and finance and trade linkages.

Natiello added that the IOM, through its work over the years, has garnered experience in assisting countries in the process of engaging with their diaspora to better understand the complexity and practical implications for social and economic development.

Entrepreneur, Diaspora Representative, United States Clifton Mc Donald said that all countries that are participating in this project will benefit tremendously. He added that Guyana’s development and transition are important to those who would like to invest in the economy.

Mc Donald pointed out that the team is here to sell ideas, and create networks that will lead to long lasting engagements and developments.

The Diaspora Unit in the Ministry of Foreign Affairs was created by the Government of Guyana to strengthen relations with overseas-based Guyanese, while encouraging trade, investment and other contributions. The Government of Guyana and the IOM have also joined forces to establish Guyana’s Diaspora (GUYD) Project to collect data on skills and resources to help guide a more effective engagement policy. Currently, the Guyana Diaspora Engagement Strategy and Action Plan, which will provide the Government with a more impactful mechanism, are being finalised.